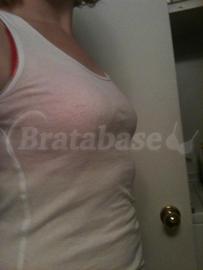 I think this bra basically fits like a 34F - Freya » Marina Padded Half-cup (1273) . Very similar measurements, and the same thing where I can almost make it fit but it still doesn't quite. I can feel the wire digging in on my right side, so I would definitely like some wider wires. A lot of tissue escapes too so I would want taller wires.

The gore is okay if I wear the bra lower rather than higher. But the higher I wear the bra the more annoying the gore becomes, because it is too wide for me.

I really wanted this bra to fit because it is so pretty, but it's never going to be right, it's just the wrong cut and shape for me. The 36E - Elle Macpherson Intimates » Spree Underwire (E75-696) is a similar bra that is way better for me because of the width.

Strap separation:
Not a problem
Underwire length:
Is too short on the side, boobs escape
Top of the cup:
Wrinkles, can't quite fill it
Cups separation:
Too separate for my boobs
Cup's width:
Outer cup cuts into breast tissue in the sides