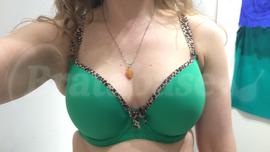 My local specialty shop* had a 50% off moving sale. They decided that they would not be moving within the mall during renovations twice in a year, after they've had to move about once a year for the last few years. So they closed up, and shipped the remaining merchandise to their other locations, though neither of them are convenient to pop into on a whim one night as this one was for me.

This is one of the styles that I tried and came very close to buying. I didn't buy it in the end though. I'll explain later...

So, I'm no stranger to the Deco, as I have had a Spotlight for many years in a 32DD. I have a review for this one in my profile. That one fits me pretty well, but is a little small in the cup because I have only been swooping and scooping since late 2016, and my Spotlight Deco predates that. Also, I'm in smaller backs now and the Spotlight is maxed out and on the tightest hooks and feeling loose.

The one that I have in this review is a 28FF, so it's 2 sister sizes down but with a cup volume up. My main goal in trying this size was 1) could I actually pull off the 28 band and 2) could I pull off the extra cup volume up and 3) using this information, determine if I needed a 30 band and which cup volume was better.

This bra fit me surprisingly well, although I did find the band to be a little bit snugger than I am comfortable with. It was closer to the band fit of my Comexim Victoria in 60HH. It felt like it was just under a 29" stretched measurement (but I didn't have the foresight to bring the measuring tape to grab measurements in addition to the fit). I might have been able to wear it all day but I might be more consciously aware of it during the day unless I had an extender with it. From a technical fit standpoint, this size is the right size. From a comfort standpoint, a 30F is probably the better fit for me. I also love that it has a j hook which is adjustable in height so that I didn't have straps on my shoulder blades. Straps felt a bit snug too, but I could have loosened them.

I obviously love the shape and support of the Deco if I was considering a second one. Naturally, I had the same awesome cleavage that Decos are known for with this one as I did with my original Spotlight. I absolutely love this green! So so much! SO MUCH YOU GUYS! I love the texture of it on the side as well. What I did not like so much is the leopard print trim and bow, although I think it's a good combination of colours. And perhaps I could have gotten used to it. I think that it looks really good against my pale skin.

Why I decided against it...

1) I struggled with the leopard a lot
2) it was still tight and I would have to find an extender and I am tired of extenders on multiple bras.
3) half price was still over $40 and Amazon had other prints and colours in 30F that were less
4) I wasn't even sure that I should have another Deco, because I have been getting pretty decent cleavage and shape with my Ewa Michalak plunge which is softer and lighter than the Deco...not as much boob armour.

I still think about this bra and other Decos and think that if I can Deco, I should Deco, and that I should retire and replace my old Spotlight. I have had an eye on the burgandy Amore but I'm focused on other bras for now.

*well, one of two, but the other one doesn't have the same brands and variety as this one did