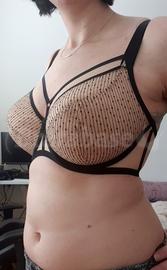 This is a newer model of Freya's, following the strappy trend or whatever.
I like this bra. As a matter of fact, I like Freya bras in general, and if they didn't give me this weird pointing downwards shape, I'd only wear Freya bras. I think I've only ever tried one Freya bra that gave me a nice rounded shape, it was a very old model (Freya Marvel Side Panel Bra (1501) but I tried it in 36F or some similarily completely wrong size for me, and it just didn't feel supportive. If I could find it in 30GG now, I'd buy it in a heartbeat.

Taboo is marked as both a plunge and a balcony, and I'll admit I have no idea where the line is for plunge vs. balcony but this bra is less plunge and more balcony. That sentence sounds dumb, but it is what it is. It's a soft cup bra, and the cups are a little sheer, with no stretch to them at all. Weirdly enough, even though it's sheer, the nipples barely show through. I don't know why. So anyway, these cups fit me perfectly, it's just that the shape is god awful and I guess I just don't like it. Maybe I'm a little too FOB? Who knows. I can't quite tell which bras are made for FOB/FOT so it's all the same to me.

The wires are extremely stiff and hard (and now I feel like I'm writing an erotic story lol) but not so much uncomfortable. My main issue is that they are a little too flat, and I don't have the strength to bend them to wrap around my torso right now. Maybe later.
The gore tacks, but is the stuff of nightmares. Again, I don't find it uncomfortable. I do think I'm a little closer set than this and there might be some poking into my breast tissue where the gore ends. I'm trying to figure out a way to make the gore narrower but I don't think a simple stitch in the middle to bring them wires closer will do...

Band is a little stretchier for a 30, as Freya's usual.

THE STRAPS. They are heavenly thick. Like almost 2.5cm thick. I love them. And they adjust long enough (another reason I like Freya bras, I never have the too short straps issue with them).

I tried to model it with a deeper v-neck sweater (that's the deepest one I have, lol) to show the straps don't really show unless you're wearing a really low cut shirt (like the tank top I'm wearing in the other photos). I don't think I would leave the house with the straps showing as I live in a pretty conservative country and I don't think that would be very appropriate. The straps are very soft and don't cut in at all (they're the same as in 34E - Bravissimo » Dina Bra (LN578) )

I got this bra for a couple of reasons-- it's only GBP18 on Figleaves right now, and I haven't tried a newer Freya bra in a while now and wanted to see if anything changed. Cups seem to run tts now, the band a little looser. Still tho, bra science and all. I think I will keep this bra because I like the way it looks and idk, I'll try get over the shape. Also, hate returning stuff.

Top of the cup:
Wrinkles, can't quite fill it
Cups separation:
Too separate for my boobs