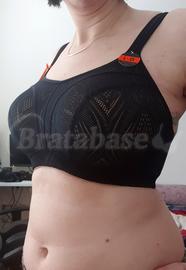 I've tried the wired Panache Sports bra before, but the size was all off... so naturally it left me with a bad impression.
I will say that in 30GG I don't think it's half bad.

First and most important -- the gore in this bra tacks on me. It's a soft tack but it's the most tack I've ever gotten in a wired sports bra so I'll take it.
The wires seem kind of sharp though, I can't quite figure out why. Like on the outside, they actually have sharp edges. Not sure how good or safe this is for the bra. The wire channels are mega cushioned on the inside, so if they are sharp there, I can't tell.

The cups do run a little bit larger. I find I can't quite fill out the apex of the bra, and not because it's small as the cups don't feel compressing or tight or uncomfortable in any way. I'd say half a cup too large. For higher set breasts/short roots it might be a full cup as the cups are extremely tall. For me, I find if I slouch the fit goes all off, I can't at all fill out the top of the cup. So I guess I should just not slouch.
I don't know if I'd fit into a 30G is the main issue I'm having doubts about returning this, mainly because I think it would be short on the sides. Maybe someday in the future in which case I will just purchase another one cause screw it.
The bra looks nice under a shirt, no pointy, but rather a nice rounded shape. I quite like it. In 30GG for me I fear it wouldn't be very good for anything other than light running/yoga etc. Just cause it's that tiny pinch too large.
Another thing, taking measurements for this bra is really difficult so take mine regarding cup depth/width/height with a grain of salt.

The band I'd say runs very tts. I've seen complaints about the band being tight and maybe it's a colourway thing, but I find this one to be comfortably tight.

So overall I'm pretty pleased with this bra. The colourway is fantastic, kind of a little more feminine and elegant rather than in your face this-is-a-sports-bra, and I find it not very distracting which makes it great for yoga I think. I can't stand colourful loud bras in yoga classes (unpopular opinion but w/e).