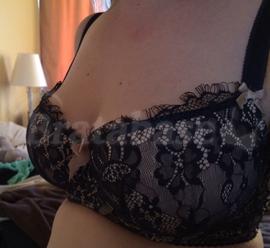 This bra was...a gamble, but it's also a testament to this site and how awesome it can be once you have added some bras and figured out what measurements and such work, what you like, and what you need. Let me explain....

This is my first Comexim bra. I've never had one or tried one or anything, but I learned from a friend with a very similar size and shape that the sizes in Comexim that I should be looking at are 65H or 70G. And well...well, this bra is a 60HH. So it is a sister size, but a smaller band than I'd normally consider. Sometimes I like to browse the listings and not filter anything in a particular brand...I just see everything available and then maybe click on nearby sizes if something appeals to me and I look at the measurements. This is how I came across this particular bra. Normally, I look at the measurements and realize that nope, not going to work (and give a small cry). This one though, this beautiful bra, said that it had a stretched measurement of 30" so I was immediately intrigued and interested! I'd seen this bra on my friend's blog previously and had fallen pretty hard for it then. I figured that as it had a user before this seller, the band must have just stretched out, but thought to ask the seller to confirm that (which she did...she gave more detailed stretched band measurements). Even if the band didn't really stretch to 30" I figured I would be ok if it got to 29", and if it was less, then I would be ok using an extender. The rest of the measurements looked right, based on the bras that I have added and measured. So it was a gamble, but at least an educated one. I bought it with all of my fingers crossed.

Now, my boobs tend to have shortish (possibly taller but deflated, so still functionally short) and narrowish roots (looks wider unsupported than they really are) with soft and malleable tissue that's pendulous. I am even to FOB and center full. I need depth at the wire but not necessarily at the apex.

First, I have to thank the seller for wrapping the bra in neon polka dot tissue paper and stuffing some into the cup for transit. Nice touch there.

Secondly, this bra is so beautiful. The navy blue lace is rich, and the C charm at the gore has a little sparkle gem in it. It's very royal and regal looking; the eyelash lace adds an additional feminine touch and adds to the details that make this beauty. It is definitely a bit worn in sections and it does not seem to be as flat against my skin as it should be (it curls up some). The shimmery beige bows at the straps and gore tie beautifly into the creamy beige lining under the lace. There is just something very pure about that beige lining...that particular shade is well chosen, I think. It almost disappears on my pale skin. If I was to do a photo shoot with this bra, I'd naturally have the matching knickers, and in true Big Cup Little Cup fashion, I'd have accessories...I think that I would have a tiara (either on my head or simply in shot) while drinking some tea from some lovely (read: fancy) china. Ha ha!

The fit is pretty fantastic. I do feel like it is slightly more minimizing than some of my other bras, but I'm ok with that. It's not serious compression or anything. I will also say that I do find that the band is a little bit tight...it's borderline. I did not get a 30" stretched measurement; I got 28.75" which is close to my snug under bust measurement (and more like a loose 28 whereas it was a tight 28 originally). I prefer 29-30" stretched bands and this is slightly less than that. That said, given that it is used, it is more relaxed and still feels mostly ok. It turns out that the bra is actually my friend's old bra (!)....the one from the blog post I mentioned above. It just had a brief user in between. Anyway, I wore it to work the day after I had gotten it (I had tested it for an hour or so when I first got it) and running errands all day a few days later. I was fine both days. I did explore the extender option, but I think that it's going to be ok without it, and if it is just a bit too tight after work, I'll take it off and maybe put a looser one on. Or have nothing.

Anyway, I think my pictures are evidence enough that I can stand to have a few more Comexim 3HCs in my life. https://d28qt14g3opchh.cloudfront.net/smileys/icon_wink.gif" alt=";)" /> My pics are split, btw...I took some immediately when I opened it up immediately after work, but after work was 8pm, and I was loosing my natural lighting fast, so I took a few pics in my bathroom under the heat lamp which is a lovely, bright, and warm light. Details are much clearer under the brighter lights. I shared both groups for perspective of the colour. Thanks for reading! Hope that you love this as much as I do.

Top of the cup:
Cuts into breast tissue (quad boob effect)
Band fit:
I can fasten it, but it feels too tight

Band is snug and borderline too tight

Band is snug and borderline too tight