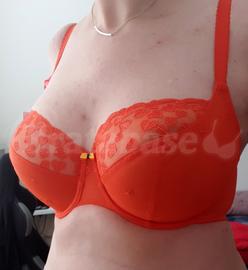 I'm posting this for the hilarity of it.
Had I bought this bra (and my upcoming Lily) in 30GG, they probably would have *fit*. If they both came sooner, they also would have fit.
Unfortunately I ordered it a while ago and before I had this sudden growth spurt, and then it took a while for it to get here and so this is what I got.

That being said, I don't think the issues I have with this bra would be fixed with a different size.

For me, this bra does not allow for upper fullness. I don't care what anyone says, I don't even *have* a lot of upper fullness but look how closed the cups are on top. I'm not sure what kind of breasts I'm supposed to have for a Cleo bra to be honest. The shape I get is just... weird. Looking at this is like looking at Marcie when I tried it (and I so regret not saving those photos because those were tons more funny).

Anyhow. Three part cups with upper part being non-stretch lace. Invisible in the photos, but the different tension in the lace where there is and isn't embroidery cuts in in the shape of hearts, cause very soft tissue. This is the same thing I had with Fantasie Alex.
The wires are alright. They're not Curvy Kate wide, but they're not Ewa narrow either. Somewhere in between and I liked the wires.
The cups are actually quite deep, and they should technically fit. I genuinely don't understand the bad fit. I guess maybe I'm on my high tide days already? I'm gonna give this bra a whirl past period and update the review.
On my smaller side there's some major wrinkling at the wire going on. Actually I felt like my asymmetry was very pronounced in this bra.

The band is tight. Even with my measurements technically being a 30 right now, I'm just not used to bands that tight so this is where my issue was, not that the band was tight for a 30. The band is not suffocating me or making me feel uncomfortable, though. Just feels tight. It stretches out beyond 71cm but I didn't want to enter that in the database as the wires get slightly distorted. I initially thought this is why the bra fits so bad, but after putting an extender nothing changed.

The gore is... very wide. I measured it at close to 3 cm and this is the first bra I had that has a gore that wide. It didn't bother me, the gore tacks, but I felt like there was soooooome wire on breast tissue going on. A gore scoop and swoop fixed it but it's a thing to note. If I were to wear this bra, I would alter the gore.

The straps don't adjust long enough, the story of my life.

To be honest, nothing about this bra seems like it should be made in a cup over E-F. The straps are so thin even if they could adjust long enough they would cut in bad--the weight of breasts would just be too much for it. The double hookset is just not what someone like me needs (or wants). I often underestimate the extra stability from that third hook, but it is quite obvious I need it (as anyone with a fuller bust does). It makes me appreciate Curvy Kate cause for all their faults at least all their bras at my size range (and smaller even) have three hooks and wide straps.

The fun part: the colour is FANTASTIC. I am absolutely in love with it. I got this colourway cause it was the only one available, but I think even if that wasn't the case I would have gone for this one. The heart embroidery on the lace is fun and cute. Maybe some day I would call it juvenile, but I quite like it today, lol.

Overall, Cleo by Panache --> not for me. That's 0/2. I do have Lily still coming in, and we'll make a final verdict. But things aren't looking so good right now.

edit: I know the tone of this review sounds a bit frustrated but I'm really not.