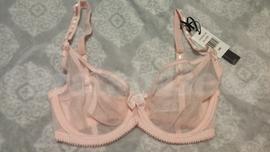 Seriously needed an extender as it was the second tightest when I bought all 4, it hurt. Wing powermesh is extremely firm with very little give. Good for long term wearout, but it means it's too tight for now.

I added pictures of both without and with an extender, including the ugly painful marks it left after digging in for only one minute of wear. It didn't fit like a "second skin," it wanted to BE my skin!!

But speaking of skin, you can see it's a very good "nude" color for me. If it's light pink color and the more yellow Sunkissed bra colors were mixed, it would be even more ideal. My bra for cream and white blouses right now.

Some in-cup wrinkling, which I thought was from it being too tight, especially considering there's also major in-cup quadding when I didn't have an extender. In the front view, it looks like it's almost trying to smash down the lower half of my breasts. After adding an extender the quadding was reduced but the wrinkles got larger. Maybe still straining but vertically instead of horizontally? I had to tighten the straps a small bit more with the extender, as they sat further out on my angled shoulders. The strap elastics are nice and stretchy, which always makes it difficult for me to tell if I have then too tight. It could also be slightly more inner full in cup shape than I am, as the wrinkles are not there on the sides of the cups.

Otherwise, the underwire shape is a perfect match for me, the gore doesn't dig (with an extender), and it's very pretty overall.

There's a bit of a weird gathering at the center gore when the bra is relaxes, but ot stretches flat ao I don't think it effects fit.