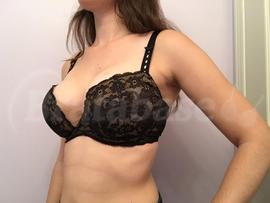 Are you ready for another alterations saga?! I bought this bra used from someone on reddit.com/r/braswap, and I have no clue how long this person had it, but the band's mesh near the hook and eye tape on each side was showing some wear and stretching. When I received this bra and tried it on for the first time, as you'll be able to see in the first two sets of photos (I wrote in my captions which pics are before/after alterations, etc.), the bra was overall too big for me. I also own the CHP Marcepanowa Magnolia and CHP Brzoskwinka in 60FF, and both fit similarly to each other, but the Brzoskwinka doesn't have cookie pockets. The Cappuccino fit larger than both of these, at least in its well-loved state. So upon my first try-on of the Cappuccino, the band was far too large, and the cups were far too large, which was not remedied as much as I had hoped when I inserted the foam pads. The straps were also extremely wide set in the front, and were rubbing the front of my armpits, which normally isn't much of an issue for me. I knew what needed to be done; I had to take in a large chunk of the band, and I had to move the straps inward.

I dealt with the band first, because I wanted to see how much, if at all, it would affect the fit of the cups and lessen the gaping that was happening. But rather than just removing the hook and eye tapes and chopping off the outermost portion of the band and reattaching, I wanted to try to move the whole strap attachment inward as well so that the band would maintain the same angle (I found that by just chopping off the outside of the band and reattaching the hook and eye tapes, such as I did with my Periwinkle Marcie and my Aqua Lily both in 30E, the bands ended up with an angle that made them feel like they were riding up). So, I marked in chalk where I wanted to move everything to (I moved everything inward by about 1" on each side), and then I started ripping out all the seams. Once the hook tape and the strap attachment elastic were removed, I resewed the strap attachment with that segmented zigzag stitch to its new position (I was trying to replicate the original stitching as much as possible), then I threaded the top of the elastic back through the strap like normal, folded it down on the inside of the band and sewed it shut. I trimmed off the excess mesh on the outside, which got rid of most of the worn out mesh, and then reattached the hook tape as normal. I didn't even bother to try and reattach the tag. Then I repeated the same process on the eye tape side, and held my breath.

I tried it on again, and thankfully, the band now fits wonderfully for me. The altered band measures 20.5" resting, and 26.5" stretched. However, the cups were still gaping, and the straps were still cutting into me. I had recently seen a picture of someone who moved the straps in on their bra, not permanently, but reversibly. So I used their method of folding the strap behind the cup and kind of over itself so it creates a "V" shape on the inside of the cup, and it both moves the strap inward and also folds down a portion of the outside of the cup and makes it slightly lower. So I did this for both straps, and lo and behold, this turned out to be the ideal solution for my problem! The more central position of the straps now eliminates the gaping and makes the cups sit flush to my body, and also lowers the outside of the cups slightly, so there's no more rubbing and chafing! YAY! I just had to loosen the straps slightly because I essentially shortened the front of the straps. (And I only realized that the straps are now slightly uneven when I uploaded my photos and looked at them, but I don't care! It worked like a charm.)

It took me probably 1.5-2 hours yesterday, but I wanted to make sure I was taking my time to measure properly and test the stitches on a scrap piece of fabric to make sure they were the right length and width to be accurate to the original stitching. Overall, I'd say this experiment was a resounding success, and I am extremely happy with how it turned out.