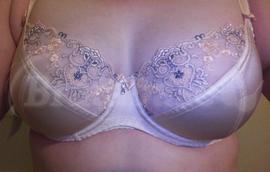 After months of feeling very unhappy in most of my bras and not finding anything new that fit comfortably, I'm focusing more on Gorsenia again, since the Solange is probably my best fitting and most comfortable bra. This is a new model, the Yasminne, and I love it already. All the pics online showed it as a sort of pinky-beige, but it's not very pink in person. It's actually almost identical to the fabric used in Ewa Michalak's BM Bibi Beżowa Perła, quite possibly the same material IMO. This pleases me, because the color is a great nude for me.

Fit-wise, I'm pretty happy. The band on my Solange stretched out rather quickly, so this time I sized down to a 65. It's very snug right now, so I'll be using an extender until I break it in. There's tons of immediate projection, the straps are a good width, and the low gore helps it not dig into tissue. I just wish their bands had a longer life before they stretch out, but in fairness I have worn that bra a LOT.

When I move just right, there's almost a bit of quadding near the gore on my larger breast, but I'm not sure going up another size would work or not. Gorsenia's size chart is strange compared with other Polish models I've tried, as going one band size down doesn't always mean going up one cup size would get you the same cup volume - the 70E cup is listed as 90-92cm bust measurement, but the 65F is only 87-89. I'm tempted to try a 65G next time, as that would be closer with 89-91, but with my short roots I'm afraid I wouldn't fill the lace part or would lose the wonderful narrowness of the wires.

Speaking of lace, it has what seems to be typical Gorsenia embroidery, mostly in the same color as the bra but also with grey accents. It's not really my preferred aesthetic, but with the comfortable fit I can't complain too much. I'll probably be removing the bows on the straps, though, along with the side boning, as it pokes under my arms as it is.

This may be my go-to brand for a while, just to have bras that don't ride down or dig in at the gore. It just takes picking the models carefully and staying away from the full cups with the taller gores.

Gore a tad too wide but workable.