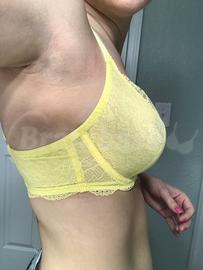 I bought this bra for one reason. It's yellow. Not neon yellow... a nice, soft, lemon yellow, and there is a serious lack of yellow bras on the market that might fit someone with projection. I intentionally picked a 30 band because gateway backs tend to make me look like the Michelin man. I was hoping to avoid having 4 back rolls and this band accomplishes that while still staying secure on the middle hooks.

I've gathered from reviews of the Fancies padded half cup longline that it's a generally terrible bra with very flexible wires and zero projection. Thankfully I can report the unlined plunge version is much sturdier. I'm aware a lot of Freya plunges require a very specific shape and I expected this to wrinkle at the apex while cutting into my upper root but it really doesn't do that. In all honesty, this is one of my better technical fits which was a sweet surprise. It's not as comfortable as an Ewa or even a CK, but it is Freya and I didn't expect the world here. Very narrow wires, very good immediate depth. Very wide gore. I'm splayed and it's short so it doesn't bother me although if it was any taller it would and it would bother a lot of people who are close-set all the way to the IMF. The gateway back is fun and a little more delicate to look at so I've let it show with strappy back shirts without feeling like I'm telling the world HEY, HERE'S MY BRA BAND.

I know this bra, with its wide keyhole gore and single hook band, isn't gonna be everyone's cup of tea. But it satisfied my craving for a pastel yellow summery bra on the cheap via Amazon so I'll keep it around.