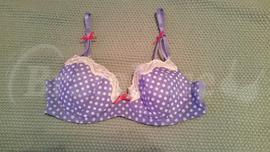 Normally I don't go for real "girly" bras, I'm more of a "meat and potatoes" kind of person when it comes to bras, meaning I normally go for more understated and practical designs, think solid print t-shirt bras. But something about this bra just drew me in and I needed to have it.

It's really cute, even if I don't do the cuteness factor justice. Being a mesh band I thought it would be very stretchy, but to my surprise it is nice and snug. It's more of a balconette style and has non padded, sewn, three section cups which is hard to find in my size. I have never been able to wear a balconette, the wires have always been too narrow for me, but these wires are wide enough for my wide roots.

Overall it's an ok fit, but the wires don't stay put and slide down. This could be one of two problems, either the cup doesn't have enough immediate projection or the straps are too long. I have the straps shortened to the max, so I can't tell if it's bottom cup depth or the straps causing the issue. Being shallow, I've always had the opposite problem of the cups riding up so I wouldn't think the cup depth would be the problem. I may have the straps shortened a bit and see if that helps.

Even with this issue it's still comfortable to wear and cute, but doesn't provide the support I though it would.