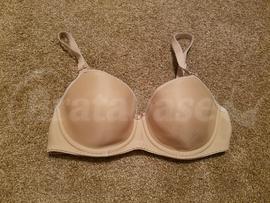 I tried this Fantasie along with the 30DD Paige and the 30DD Rhiannon.

I think this bra runs a bit shallower and smaller in the cup than the other two. The cups are pretty average in width across the models. The gore is higher than on the other models and the wires a bit longer, so it's a bit more full coverage. On me, this bra gives a more minimized look, but it could be from fit problems due to the shallowness.

I like that this bra has slightly thinner cups than the other two similar models.