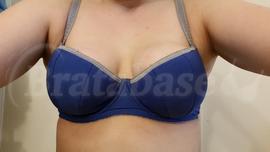 I love the beautiful cobalt blue of this bra combined with the light gray straps and trim. I didn't dig the plaid pink, light green, and light blue bow so I removed it, but I can see how others would like it as a trim choice. I was shocked that the measurements on this were so similar to my CHP Opium, because I found it more closed on top and that it produced quadboob where the Opium did not. It's cute enough in a hard-to-find color that I'll tolerate the less than optimal fit as a novelty or bedroom bra - though I have to say, this and the Opium have converted me from a diehard Comexim buyer to an Ewa Michalak fangirl. I accepted Comexim's non-tacking gores and pretty damn good immediate projection in their 3HC styles, but Ewa M's actually tacking gores and deeper projection in these CHP styles have opened my eyes, yet again.