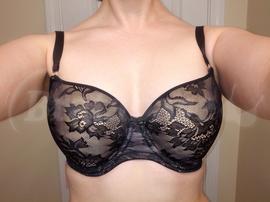 This review is for the black/nude colorway I got from a reddit user who thought she had the Panache Idina Balconnet Bra (6961) , one I've been wanting to try for ages. This is an ok runner-up, though! I love the gores on plunges, even though they're never my shape, and this one is just as wonderful as always. Is there a bra out there that's shaped like a Freya/Fauve half-cup but has a gore like a plunge? So far, that answer is no, so I try regular plunges instead! This one is quite tall for a plunge, but it doesn't feel like it when it's on.

The cups are very soft and smooth inside, which is great because I inevitably have problems with inside-cup seams scratching, and the foam lining is about as stiff as padded bras but without the boost in volume, so they're supportive and good for discretion and minimizing stair-bounce. Like most plunges, they are shallow-ish at the wire, causing the bra to ride down fairly quickly while as it tries to find the place with the most depth to accommodate my immediate projection. They also close more quickly on top than other plunges I've tried recently (or perhaps the band is a better size and keeps them more firmly against my chest, making it more obvious), so I get some serious quad boob that doesn't entirely dissipate after swooping and scooping. A 28G might solve all of this, though.

The wires are just on the firm side of the flexy-hard spectrum, which is nice for me. They are too narrow (again, might be solved by a 28G) and the wires are the wrong shape curve (typical, never had one that was right for my Nike Swoosh, not really a problem), but the sides of the cup are tall enough that my feisty side boob is mostly contained within them. The strangest thing, I think, is that there is almost a cm of space in the wire channel, but I can't push the wires out into it, so it's possibly sewn shut? Unless the previous owner did this to adjust her comfort, I've not seen it done by the manufacturer, and this still has the tags on it.

Ladies with long torsos or low-set breasts might need to watch out for the straps: I have them as long as they go, and they are just comfortable. Short ladies may like them, though, because they are fully adjustable. The band has 3 sets of 2 hooks, and is fairly snug on the loosest. It also has fairly tall wings, considering how far it tapers.

There is one spot that's bugging me, and it's where the "Panache" metal label is sewn on (not the tag, kind of on the side; see photos). Something is caught in the threads holding it on and it's scratching me. I'd probably just cut it off if I were keeping it.

Listing this one right away so I can start looking for a 28G!