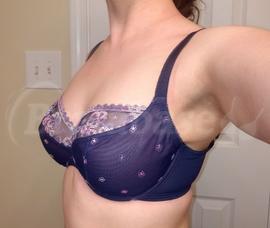 My shape: even-to-slightly FOB teardrop with very tall shallow roots, loads of immediate depth but moderate overall projection at the apex, close-set in the middle, side boob for days, center-height and self-supporting, with very firm tissue that does not take kindly to being pushed around by wires and pads. Also starting to suspect that I have a low apex, between the lower projection and upper shallowness and the problems I have with bras that should otherwise work.

This review is for a gently used bra in the navy colorway I received in a swap from r/braswap. It's a beautiful purple-y blue that I like a lot, and it's wonderfully thin and sheer and probably perfect for summer. If only it worked!

Ok, so if there was a correct size for me in the Lucy, this is not it, but it's probably close. I'm not sure the style works for me anyway, though, and mostly because I'm starting to wonder whether the bra I appear to be wearing and the bra it feels like I'm wearing are the same one! I did only wear it for about half an hour to get a good read on it, and take photos, but still.

For one, I can't remember the last time I had so much of a problem with the straps moving the top of the cup. They didn't FEEL uncomfortable or chafe-y in my armpits or anything, but they are apparently in just the wrong spot. The top edge buckles as badly as if the cup was 2-3 sizes too big unless my arms are perfectly straight by my sides.

Speaking of mysterious problems that don't feel like problems, let's talk about the gore. It's pretty tall and while it did feel a little firm and... tight against my chest, I guess (maybe a bit of shallowness at the inner cups?), it certainly didn't feel as bad as the red marks it left look. They're not really the welts I usually get from mean gores; they're not bruises from pressure or friction marks from the height, just angry-looking marks that don't feel like anything. Full disclosure: I mark easily. It's a thing. Apparently it has to do with water retention and possibly inflammation like with allergies or hormones or other conditions. However, there is a difference between these hormonal marks and the marks that bad bras give me, which are usually tender and angry-looking. Kind of like these marks, except with more pain. This time, none? So good, I guess. Still weird.

The wires at the sides also left angry red marks under my arms, but again, I felt none of it. Still weird. In the photos you can tell that they are a bit narrow for my Super Side Boob™roots, and maybe a bit short. They do take up the whole channel, though, so there is no room to shift or adjust them in or out. There's also a bit of gapping just behind the wire at the wing under my arm, but this happens a lot on me and doesn't seem to affect wearability.

On to the actual obvious noticeable problems! First, I'd just like to say that I think the immediate depth on these cups might be pretty close to just right, or at least getting there. In all the wiggling I did, the wires never once came out of my IMF. The shame about that is if I did size down a cup or so to solve the wrinkles in the outer cup and upper lace panel, I'd lose even more underwire, AND the upper cup would probably start that faux-quadboob thing and cut in. Right now, the upper edge is comfy (when it stays down), and instead I just have extra space in the sheer panel. Such is the nature of the tall/shallow rooted, though: These upper panels are so closed on top, and they anticipate roots that stop shorter and upper fullness with a more projected angle up here, but that just ain't me. I also think the apex is just about right, or I'm a hair below it; any higher and I'd be right at the seam, which is always scratchy and terrible, so this is nice.

The band is nice and comfy! No itching or scratching, and it seems to fit nicely enough even though it's been loved before. I have tried very few Cleos ever, though, so I don't know what that indicates about stretchiness. My 28G - Freya » Patsy Padded Half Cup Bra (1223) is currently my best band, if that helps.

Gonna try and get this one listed ASAP!

Gore is SUPER SNUG but not that uncomfortable? and still leaves red marks