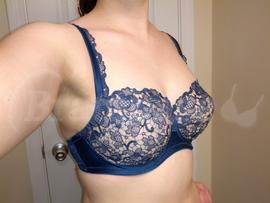 My shape: Self-supporting teardrop with very tall and wide roots that give me fitting problems like shallow breasts, but with max lower projection and loads of side-boob; slightly FOB, center-set, forward-facing, and firm tissue that doesn't like being pushed around.

This review is for the Sapphire colorway I received in a swap around Christmas.

This is a very pretty bra, but alas, not for me. First off, the cups are ITCHY. Scratchy seams in the cups absolutely drive me nuts. Curiously, it wasn't the lace that was itchy- that was barely noticeable, regular lace, and the satin was SO SOFT, especially in the straps, and even the band wasn't a problem, nor was the tag. It was all in the modesty cookies, and boy, it was bad. When I took the bra off after the photos, it left red marks all around my poor nipples, and while I welt easily, this was still pretty significant. I don't know if washing would fix it or smooth out the sheer fabric seams at all. Honestly, I'd rather just have a completely sheer all-lace cup instead.

Projection:
I think this bra has a lot more upper projection than I need. My tissue slopes in a fairly straight shot from my collarbone all the way down to the apex, and I have sadly discovered that there is (so far) not a single three-piece cup that can comfortably or attractively accommodate that. It also is fairly shallow in the bottom of the cup. Looking at other users' photos, I would have thought it would be projected enough, but now that I am going back and looking at the stock photos, I can see a lot of them riding down slightly on some of the models and wrinkling in the same places. The major culprit, though, is the apex: that sucker is REALLY TALL. Like, more than 1" higher than mine. You can see in the photos that scooping didn't do that much to alleviate the wrinkles caused by this combo. The cup is too high because of all this - you can also see where I tucked it down so things fit a little better. (Note: without having the seams criss-cross right at the apex, it is way less scratchy this way!)

Also, the sides are slightly shallow, too - inside by the bridge AND outside under the arms. I think this is why I initially felt like the wires were too narrow, but in the photos you can see that they obviously aren't. Because of this, I get a little bit of tissue trying to escape over the wings as if they were too short, but not enough to bother me.

Wire width:
Great! I love wide wires. These are definitely wide enough for me.

Wire shape:
Pretty good! Too steep, but it didn't bother me.

Band:
Maybe a little on the tight side, but I think it would relax with a wear or two. It was certainly comfy enough, and obviously sat properly. I wish it had 3 hooks instead of 2, but oh well.

Straps:
Plenty of adjustable length for me, although they can only adjust halfway because of the embellished front. Speaking of which, I love embellished straps! Lots of people don't, but I do. They are so pretty and cute, and so SOFT! If I could, like, cut these off and put them on another set of cups, I would.

Bridge:
The center gore is tall, but actually really comfortable. I had to go back and edit to add this, because it was so comfy I forgot all about it. Super narrow! I'm sadder now that this didn't work out, because I need super narrow bridges. https://d28qt14g3opchh.cloudfront.net/smileys/icon_sad.gif" alt=":(" />

Overall, not a bad bra, and still very pretty. It's a bit more like a frosted cupcake in person, in my opinion, but I love the choice of tassle instead of a bow at the center front, the embellished straps, AND the comfy bridge!, but I do wish it wasn't so scratchy. There's no way I want to troubleshoot this to find a potentially better size match with that looming as a possibility.