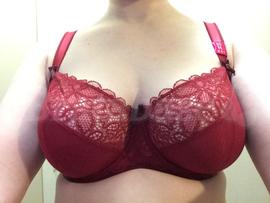 Ok, so I love the super thick full frame band! The stretch lace on top is helpful as well, but almost covers too much of the cup and thus in cup quads just a touch. Bottom of the cup is very soft lined mesh. Scalloped, fully adjustable straps, set too wide, of course, but better than Bardot, Portia, and Florence. Flirtelle straps are narrower set.

Ellace has more immediate projection - about the same as Portia and Bardot, but more than Florence and way more than Dreamcatcher. Immediate projection is about the same as Flirtelle Ellie and slightly more than Flirtelle Rosie and Giselle. Accommodates centre fullness better than Florence because of stretch lace and way better than ribboned Portia, but not quite as much as the shallower Dreamcatcher. Flirtelle Rosie is the worst for centre fullness and Giselle is like CK Florence. For centre fullness, Flirtelle Ellie and CK Bardot are best overall without stetch lace.

Ellace feels more like my Flirtelles and CK Bardot than other CKs with much taller wings and a slightly taller and narrower centre gore. Size and cup depth are pretty uniform across all the CK and Flirtelles I have tried. Florence is surprisingly wider by a whole cm and as I have mentioned, and Dreamcatcher is shallower.

The differences in this update of CK Bardot is primarily in that it feels lest utiliarian in its construction - the elastic under the arms between the strap attchment and the edge of the wire is way toned down and actually curves not cuts, and the mesh is softer and lined. The band thickness is new and nice and the outside frames are lace not poly-satin and a little more practical, the wing is a touch taller, and the straps a touch narrower set. The band of Ellace is a bit bigger and looser - enough that I don't need the extender - but I don't think it will stretch out as much as it is thicker to begin with.

Strap separation:
Are too far apart
Top of the cup:
Wrinkles, can't quite fill it
Band fit:
I can fasten it, but it feels too tight
Cup's width:
There is empty fabric on the sides (Cup too wide)

Strap separation:
Are too far apart
Top of the cup:
Wrinkles, can't quite fill it
Band fit:
I can fasten it, but it feels too tight
Cup's width:
There is empty fabric on the sides (Cup too wide)