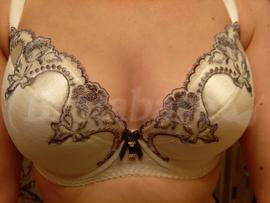 I did not want this bra, but it was the least expensive of the Gorsenia deep plunge models. Was I wrong! Wow! I feel like royalty in this bra. The tonal ivory polka dots, shimmering satin, and silver embroidery are an unforgettable combination. This bra is stunning in person....and, I am a proclaimed "minimalist." My resolve has weakened https://d28qt14g3opchh.cloudfront.net/smileys/icon_wink.gif" alt=";-)" />

If you are close set, you may need to bend the wires of the deep plunge (make the curve steeper) and sew the cups closer together to reduce the distance between the cups. Otherwise, the unlined and half cup Gorsenia bras are just as beautiful and have more narrow gore bases.

This cup is wide-6.8". Wide, shallow users, here is a gorgeous bra for you. Narrow, projected users, we should run along....unless we like to alter. The cup can be narrowed and more projection created. Subsequently, the band may require an extender.

Bottom of the cup:
Can't quite fill it
Cups separation:
Too separate for my boobs
Band fit:
I can fasten it, but it feels too tight