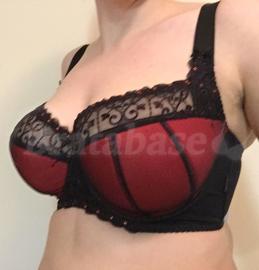 THE TAKEAWAY: Called "semi-padded" by the manufacturer, this bra has a lightly-padded three-part bottom cup topped with (NON-stretch) lace. Impimi recommends it especially for fuller-bust folks. Good projection, seems to handle my center-fullness well. Band is on the bigger side of TTS, hard-stretching to ~31". The lace is fairly stiff, so truly FOT folks might want to look elsewhere, but with my tall roots I was able to go from an FF to a G and get a good fit. Straps are wide-set.

DETAILS: I find the 30G to actually be a liiiiittle bit big on the right side tonight (which is funny, as that's usually my slightly larger side), but while tightening the strap fixed it, it's worth pointing out that Impimi does asymmetrical bras for no extra cost, so if I wanted a 30G that was an FF on the right side, they could simply... make me one. Nice.

The straps are a bit of a problem, though, for me -- and I say that as someone who doesn't usually have issues with strap placement on a 30 band. (I had problems much more regularly when I was a 34.) They're definitely threatening to give me some armpit chafe, but I'll probably keep it anyway because it's so nice everywhere else.

For comparison, my usual UK size is 32FF/30G, depending on the band, so for me this was a pretty straight conversion, although the FF might've also fit in a style that was a little more flexible on top, so when I make my next order (it'll probably be the Impimi Colette with the STRETCH lace top), I'll try 30FF and 30G again.

The Adell probably won't fool you into thinking it's a luxury bra (and for this price point, I wouldn't expect it to), but the lace is fairly soft rather than actively scratchy, and so is the inside of the padded cup. It's also just a very pretty bra, but admittedly I'm weak to black and red colorways.

The shape it creates is very nice, I think; not extremely round, but not pointy either. Uplifted in a gentle way. And the light padding is sure to be appreciated by people who worry about unlined bras and nipple show-through.

An interesting note on the gore: it isn't actually as high as it looks. The top inch of it is just soft fabric, the wires having stopped lower down, which is kind of perfect for my center-heavy boobs. It keeps them a little bit separated, but doesn't press in, and might be more comfortable for people who have issues with other gores.

Also, the Adell and many other styles are currently on sale for as low as $20 USD, so you might wanna head over there now (or wait to see if they do a sale for Christmas).