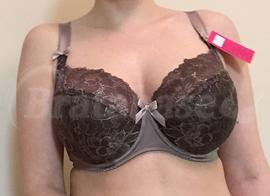 THE TAKEAWAY: Construction very similar to the 30G - Cleo » Hettie Balconnet Bra (9011)! The stretch lace panel on top makes this a forgiving bra, and I can almost get away with it in both a 65G (one cup size down) and a 75F (two cup sizes down). Good projection, handles my center-fullness admirably. Band is TTES (True To Ewa Size), stretching to ~31". If you mostly wear padded Ewa styles, you may need to size down in the cup for the BM. The stretch lace is good for my tall roots, but should accommodate both FOT and even-full breasts well.

DETAILS: In my review of the Cleo Hettie, I note that it (and the Marcie) square me off on the sides, lending to a somewhat odd torpedo shape looking down. For whatever reason, and despite what seems to be a very similar seaming construction, the BM does not do this; I get a very round shape from all angles. Maybe it has something to do with the fact that the stretch lace covers the entire cup? Maybe the lace is molding me into a rounder shape? I guess we'll see, when I eventually try the SM.

I have so far tried three BM bras: 75F - Ewa Michalak » Bm Szmaragd (794), 65G - Ewa Michalak » Bm Bibi Flamenco (808), and the Naomi. All three were beautiful, but I think the Naomi is a stand-out for me, with the way that the lace is only on the cups, the exposed band pleasantly-silken to the touch, and the choice to leave the stretch lace panel unlined, which creates a very elegant look on the skin. That said, do note that the Naomi is unlined: the seam on the inside of the cup is much more prominent against your skin than in the other two BMs, and I'm sure there are people for whom that would be a sensory issue.

I've read several reviews that call out the BM as having hard wires. I'm not the person to ask about that, because I've never actually met a bra with wires too hard for my comfort. The only time I've even really noticed wire hardness was when I used to (gulp) put bras on upside-down and backwards, then wiggle them around and yank them up. Doing that with some of my Panache bras caused a hilarious, audible SLAP as the gore viciously whipped into place. But even then, when I wore them, they weren't actually uncomfortable. I will say that the BM has the firmest tack I've experienced in an Ewa Michalak, but since I've probably worn most of her padded bras in the wrong size I'm not really sure that's not the reason.

Currently, the BM is my best-fitting bra. For many of the others, what I'm calling good is in practice a little small in the cups, or a little big in the band, or a little wide in the straps. The Naomi BM is none of these things, at least not for me. (The strap width is especially good in the too-small Flamenco, though, so that in itself might be a good reason to try more BMs in 65...)