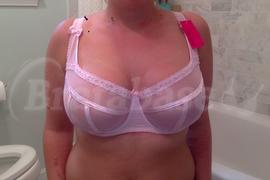 Once again, the SM cut has served me well. After receiving an SM Bezyk which was too tall in the cup, I was nervous about how this one would fit me, and I think it fits very well!

The cups fit about true to size, but are shorter than some other SM cups (which is a good thing for me). The top part of the cup does flatten me a little, but not enough to be a big concern. However, if you're fuller on top or have taller roots, that might be something to be aware of.

I sister sized up in the band because Ewa noted that this band runs small. I think that that is an accurate statement, but its probably closer to half of a band size small, rather than a full band size small (so if you're on the smaller end of your current band size, you'll probably be fine sticking to that).

I love this bra though! Coupled with the matching bottoms, it makes me feel like a ballerina https://d28qt14g3opchh.cloudfront.net/smileys/icon_smile.gif" alt=":)" />