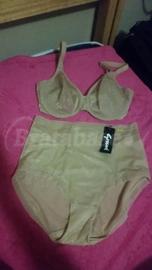 One day my mind conjured up my dream bra - a seamless, unlined beige bra with no pattern, lace, anything. Something to wear under white t-shirts that wasn't moulded. This was the bra I immediately clung to. And here I am.

Guys, this bra is awesome. I want it to work for me so badly https://d28qt14g3opchh.cloudfront.net/smileys/icon_sad.gif" alt=":(" /> The wires are so soft and flexible. Seriously, I put it on and went to feel how the center gore was sitting on my chest - for a minute, I thought I'd bought a wireless bra. But nope. The center gore is pretty low, and the wires don't come up far at all in it. No stabbing!

The sheer look isn't for everyone - in one post someone said how it "leaves nothing to the imagination" - and I really like that! Some people won't. Not gonna lie, sometimes bras like this will smush your nipples in the weirdest, most unsexy ways. But other times, when your nipples are sitting straight, it's a very nice look. From the front, I feel like this bra makes me look a bit flattened and wide (I think that's just how I perceive it based on how bras flatten out your nipples), but from the side I am actually more rounded than I was expecting.

Under a shirt.. Depending on the shade of your nipples, this can be a pretty solid nude bra - not for those who are afraid of hard nipples, of course. My nipple color shows through my lightest shirt a tiny bit with this bra - the pierced one is more obvious. And a weird part of me is cool with this - it's like wearing a bra, but not. It hides the natural pointy, droopy, kind of splayed thing my boobs do without a bra, gives me a nice rounded shape instead, but doesn't hide my nipples. I know this isn't what most people are looking for in a bra, but I'm kind of mystified - of course, in most of my shirts it won't be an issue anyway!

The fabric is so smooth and soft - not itchy at all. The sparkle adds a special touch to what could be another boring beige bra (it also comes in a brown color called mocha, so at least Fantasie has more than one "nude" option here)

Most of my bras are in 30E, but after reading some reviews I sized down to this 30DD and I think that was the best option. The cups are tall and full coverage, and a 30E would very possibly be too tall and I'd have more trouble filling out the tops of the cups. Originally, I struggled with this bra fitting shallow and wide. Due to the flexible wires, the cups were being stretched with the band. Adding an extender helped so much with this, though the band didn't really feel too tight before. With an extender, I think the bra allows for some projection and even has narrower wires. I think the shape it gives me is just as round as my Cleos, with a bit less lift. I'm in love.

I saw another review that noted that panties ran big, so here I want to say that I found my matching high waist brief to fit small. I bought an S after looking at their size chart, but I guess I should've went with a M.

After a few wears, I am rating quality as "OK", because it feels fragile for a t-shirt bra. I am always wary of catching something on the fabric and causing a run, and pulling at the cup edges or gore too much might pull a string loose. I expect this in a lacy, sexy bra but less in a t-shirt bra.