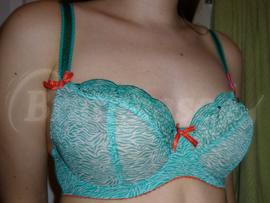 I originally wanted to try the Curvy Kate Bardot but settled for a sister cut Madagascar because it was cheaper. I have tall roots but not a lot tissue up top, so most lined bras wrinkle at the top so I thought trying a bra intend for short roots might help. The tops of the cups still wrinkle due to me not have enough tissue in the right spots but also my tall roots are pushing against the top making it worse. Its also wrinkling slightly at the bottom due to not enough immediate projection. I wanted this bra to fit because it a beautiful color and the cups have a pretty embroidery on the top. But the shape was unflattering because it cuts into my tall roots. I would recommend this for someone with short roots and average projection.