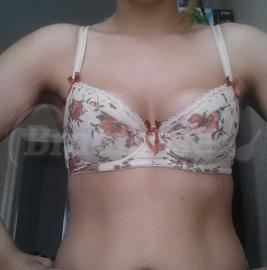 Going to do a full review of this later this week when I have a 60F to compare, but as of now I will just note that the 65F is super comfortable, but has a few fit issues.

Notably:
The band seems very big-not to say that it isn't TTS. This isn't a huge bother to me as it once was. It isn't flimsy or cheap; it is great quality as Comexim always provides. It doesn't feel like the band isn't even there, it isn't riding up, and it doesn't feel like thin elastic or anything like that. It is simply that I probably need a 60 band. Or could at least use one.

I know your support comes from the band, and I can stick my entire hand under it, so it's not the most supportive thing for me. However, my boobs have lost most of their weight, so I don't find it terribly problematic.
I guess this is a good sign for my 60F on the way, which I bought after being offered, because I suspected that it might fit better in both band and cup.

Not a super good sign for my 65E's on their way from Comexim, but, I suppose I can always re-sell and re-order if I got bands that were too big. I'm also not sure if this is something specific to the Ingrid. We shall see.

The cups are another thing. Lately I haven't been wearing cups to cover my tail of spence.
This could be why I can wear 2 cup sizes down as opposed to just 1, after not losing as much weight as should result in 2 whole cups. My previous bras in 65G and 30E always covered my TOS. My boobs fit well in those; regardless of the fact that they also covered the TOS, they had no issues with gaping, and I had more upper tissue than I do now.
Now I feel like my boobs are just floating around in cups that cover both my boob and TOS. They don't follow the same lines and curves, and my tail of spence goes up much higher than my boobs. Trying to cover both just does not work since losing so much upper tissue.

If I try to have a bra cover my tail of spence, the bra ends up too high and deep on top for my boobs, which makes them float a little. This has been a HUGE issue with my EM bras, which is why I am currently sticking to small CH bras.

This means I either need a true half cup bra in 65F/60G, or to try out a 65E/60F, which is what I've decided on. However, the wires on smaller bras fit me MUCH better and result in a much nicer shape.
So, I don't care. I believe TOS is breast tissue, but it doesn't work inside of my cups anymore, and I don't honestly think it needs to be there. It also isn't so pronounced on myself that I mind it much.

Anyway, more on the actual Ingrid in an update! Will leave a link here and on my 60F https://d28qt14g3opchh.cloudfront.net/smileys/icon_smile.gif" alt=":)" />