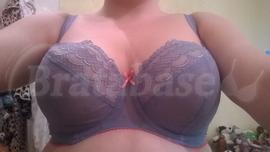 First off, I love the colour of this bra. The lovely lilac base goes wonderfully with the fluorescent orange detailing. I've been um-ing and ahh-ing over whether or not to finally purchase a @Marcie after getting properly fitted 7 months ago, but when I saw this new Bluebell colour I just had to buy it. It's one of the first non-moulded bras I've bought since getting re-fitted so I wasn't sure about sizing, but since reading reviews that the top of the cup tended to gape I went for a 32FF instead of my usual 32G and I'm glad I did because it fits almost perfectly! The lace does gape by a millimetre or two but even then it's only on my smaller breast and is unnoticeable under clothes. The shape from the side is a lovely rounded and uplifted shape, and the wires curve around the root of my breasts like it was made for me. The band is rather stretchy, but I think a 30 band would be too tight and could distort the wires. When I first tried the bra on, the wires at the side felt a bit painful, as though they were sitting on breast tissue even though they weren't, but when I wore it for a whole day there was no pain and sometimes I even forgot I was wearing a bra because it was so comfy! I think the bit of pain at the beginning was partly because I'm used to wires sitting further back from my root and partly because the bra was new and hadn't been broken in yet. I was worried about the straps being too far apart for my narrow sloping shoulders but I'm happy to report that there are no issues so far with digging in or falling down constantly. Another nice thing about this bra are the low wires at the side, which means no digging under the arms. The only bad thing I have to say is that the centre gore is a bit wide for my close-set breasts and doesn't always lie flat, but that's a minor niggle compared to the overall look and feel of the bra.

Underwire length:
Is too short on the side, boobs escape
Cup's width:
Outer cup cuts into breast tissue in the sides

Underwire length:
Is too short on the side, boobs escape
Cup's width:
Outer cup cuts into breast tissue in the sides