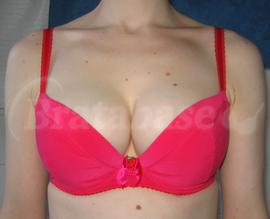 I got this one from the exchange with martka00, thank you!
This cut is new to me. It was conceived for smaller busts (MP means mały plunge - small plunge) and I think the bet is won and I’m surprised this cut hasn’t met more success.

The cups:
They’re very, very low. I think it’s fantastic in smaller sizes, but I’m on the borderline where this height causes jiggle and quad boob. It’s not because of the too small cup (which encloses all the breast tissue), but precisely because of the too low cup. Because of that, I feel like my boobs were heavy and they also look like.
The underwires are narrow, even narrower than in my S Pralinka but they’re also more flexible so in practice they’re actually wider, but still OK.
Ewa says this cut may require sizing up in the cup and it’s true in my case. It’s smaller than PLs in 70DD and S in 65F. However, I'm not sure if 65FF (if it existed) would fit, the wires would be probably too wide.

The band is rather on the looser side, but the bra is used. It feels a little loose on the first hook but I have 2 more left.

The quality:
This is where I’m a little disappointed. In most cases, EM bras present a great quality, but this one must be one of the exceptions to the rule https://d28qt14g3opchh.cloudfront.net/smileys/icon_wink.gif" alt=";)" /> Don’t get me wrong, it’s not catastrophic, but sometimes I think they don’t really test their materials before deciding to make a bra of it. The material in TzM pills a lot, especially on the band and that’s exactly what happened to my Burek after 1 (one) wear! On the other hand, I must admit it’s very soft and the bra is very comfortable.

I have now tried the 3 padded EM styles. They are all great constructions, create a nice cleavage and every cut has its advantages. In my case and at this moment, the S cut seems to be the best choice, as it provides more support and stability. TzM is not the most supportive, at least in this size and on these boobs, but it might be a great deal for firmer breast.