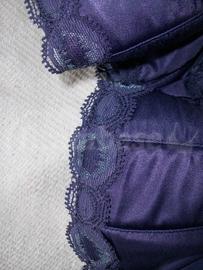 Pawie Oka (Peacock Eye) is a discontinued CH from late 2011.
The bra itself is smooth purple satin. It's shimmery and soft, it feels plushy and the band is really nice against my skin. It's not quite as deep purple as it appears in photographs, but it also isn't muted like 65E - Ewa Michalak » Ch Lawenda (588). It's somewhere between the two in shade.
The trim along the cups and the band is where the name comes from. It is comprised of purple circles the same color as the bra, but inside this circle is an "eye", like a peacock feather. It's a shimmery silver teal that is very beautiful in person. Frankly I never noticed in photographs, but it was the first thing I picked up on when the bra was in my hands. It's hard to photograph, and I posted the best two that I could get but they still don't really show just how much that little eye contrasts with the purple. It really makes the bra in my opinion.

This is a 60 band that I could stretch to about 27.75 before I started distorting the wires. This is good for me, but it's fitting just a tad tighter than I want it to at this time of year. You can see the hooks kind of pulling in my picture, so I'm wearing it with a single column of an extender. I can wear it comfortable on the loosest hook, but I'd rather not.
The straps are partially adjustable and stretchy. They're not the most comfortable even though they are well padded in the front. I feel like they dig into my traps more than they should. As noted in PetiteCollegiate's review of this same bra, the straps are very wide set. Normally this isn't an issue for me, I have broad shoulders and a wide upper chest, but these ones actually feel like they may slip off my shoulders at times. They've not, but being so wide set and so slippery I'm aware of them always.
The wires are narrow goodness. They're scaled down well and are low under the arm.
The cups are soft and comfortable. They give a nice projected and heaving shape. The cups are a little floppy like my 75D - Ewa Michalak » Ch Toffik (138). I think this is a foam thing as other older CHs are described as having the soft cups. I bet Ewa now uses a firmer foam which is why the shape is so much more dramatic in the newer bras than in the older ones.
That's not to say that the shape in the older CH/Ps is bad or not uplifting, it just isn't as "strapped in" as the newer bras.