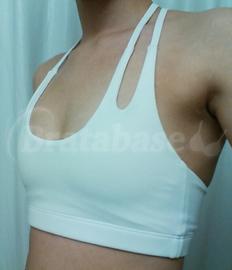 This pretty little thing is marketed as a sports bra, intended mainly for yoga and other low impact activities. I'll be honest, I bought it with zero intention to use it as such. It mostly struck me as a beautiful, minimalist layering piece. But since it's technically a sports bra, I will review it in that context first.

If you want something to keep your girls strapped down tight, move along. The Teardrop is not what you're looking for. The band is comfortable -- not as snug as I would like, not terribly loose either, but definitely too loose to provide enough support for something like running.

The straps are quite long and not adjustable, which is unfortunate if you are not a 6ft tall supermodel or if your boobs happen to be high-set. The band sits lower than my IMF because there isn't really any way to adjust it to sit higher, so again, not the best for support. It doesn't affect comfort though, so I'm not terribly upset about it.

In the product description, Montiel makes it very clear that this is NOT supposed to be a compression bra, which is kind of funny because it is actually fairly squishing, imo. Almost as much as my 32A Under Armour sports bra. In other words, it's not terribly flattering from the side. It does come with a thin set of pads, which appear to be primarily for hiding nipples. I am not wearing the pads in my pictures but the bra looks pretty much the same with them inserted.

All that being said, I'm still glad I bought it because support be damned, it's SO PRETTY! As far as I'm concerned, it's a strappy bralette made out of strangely thick but still breathable material. Unlike regular halter bras/bralettes, this thing doesn't put a ton of strain on my neck, which I appreciate. Interestingly, it doesn't ride up either. Layers well under open or sheer back tops and the double straps also look cute from the front. Comfortable enough to sleep in (if you really wanted to).

I haven't washed it yet*, but the care instructions claim this thing will survive the dryer. I intend to air-dry it, just in case, because it was a little on the pricy side.

TL;DR: not a good sports bra* and definitely not for big heavy boobs that need iron support. Would recommend to anyone looking for a comfy and simple strappy bra.

*2016 April update: I've been going to the climbing wall regularly since February and this is now my favourite bra to wear for bouldering. I have to revoke my previous comment that this is not a good sports bra -- it's by far the most comfortable thing to wear for low impact sports. It has also survived the laundry just fine so far, being machine-washed with cold water and left to air-dry (which it does quickly).

*2016 August update: Having now acquired the Thalia bra from the same brand, the Teardrop is no longer my favourite low impact sports bra because Thalia fits better. The coverage is higher and the cups seem to have more stretch which translates to more room and less squishing. I still wear this one lots but it's not as good of a fit. I do spill out slightly if I scoop and swoop very thoroughly -- not sure if this happened before without me noticing or if my boobs got slightly bigger.

straps too long, some spillage

straps too long, some spillage