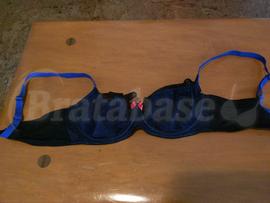 I bought this together with the 30F to compare and this was more successful in terms of fit. Not much to say about the looks, other than I do like it. I like blue, and I like that the straps is a brighter blue and there’s a bright pink bow for contrast. I do wish the cups didn’t have the black overlay since I already have enough black bras.

In terms of fit, it’s very similar to the Pixie I own. It has the same spandex-like material for the band and it’s also a bit tight for me, I’ll be wearing an extender until it loosens up. Cups fit similarly and gives a nice rounded shape. I like that it has stretch lace on the tops of the cups which prevents digging in on the top edge if you're fuller on top. It doesn’t have a second layer of mesh so it will actually stretch. I’m not sure if it's the same in the larger sizes, but in this size range it didn’t.

The wires are a bit problematic for me. I generally don’t do well with high gores as they tend to dig in and my boobs sit close together. I’ve already bent the wires out, but the bra still requires some breaking in before it’ll really be comfortable. The width of the wires is ok.

Overall, I like this bra and the shape it gives, but it will require breaking in before it’ll be comfortable.

Center gore comfort:
Underwires dig into sternum, because they are too high
Cups separation:
Too close together for my boobs
Band fit:
I can fasten it, but it feels too tight

Center gore comfort:
Underwires dig into sternum, because they are too high
Cups separation:
Too close together for my boobs
Band fit:
I can fasten it, but it feels too tight