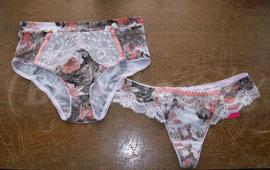 A little vent here: I wanted this made in a CH. Ewa said no CH, but she'd be more than willing to make it a CHP for me. So, I really appreciate that and I'm glad that she is willing to make different cuts than what are available. But, why not a CH? In my size, there's not much difference. The pattern can't possibly be that far off from what she made me, can it? Because there's not much difference, I am happy with what I have and I wouldn't hesitate to do it again; it would just be nice to have more CHs or at least know why they are no longer available.

I absolutely love this bra. If you told me I could only keep five bras (how cruel!) this would be one of them.
I bought this on promo along with my 65E - Ewa Michalak » Chp Klaudyna. This was a custom order as Colette is not actually made in the CHP cut.
The pattern is floral with varying shades of mousey brown (sounds unattractive, it is not), coral orange, and ecru with a few strokes of really rich, almost black, brown. The lace along the trim is very light pink and the straps are the same pale shimmery pink of the Klaudyna. The satin ribbons across the top of the cups, on the wings, on the front of the straps, and on the underwear are the same coral in the pattern. The bows are ecru satin with the same coral ribbon wrapping the middle. There is only one on the bra, at the gore.
It is grandma tea-party (like 65G - Comexim » Ingrid Biustonosz (289) Ingrid) but 1900 NY high society grandma - something a Wharton heroine would wear.
The fabric is a stretchy jersey, but it isn't smooth. It's almost textured like my 65E - Ewa Michalak » Ch Lawenda (588). It's not rough or anything like that, but it has a different handfeel than expected.

The band on this is snugger than my Klaudyna stretching to only 28". That's fine and not too tight for me. I'm comfortably in the loosest set of four hooks without an extender.
The straps are wide and comfortable, and again, slightly wide set. They are technically only half adjustable (why?!), but the ribbon dividing the front from the back is only held on with a stitch, so I can jam the adjuster over that obstacle. They don't slide around and move along the intended portion of the strap smoothly when pushed.
Wires are perfect. They sit in my IMF do not slide, do not rub. They come up high enough on the sides to contain all breast tissue without stabbing me in any muscle and they are only as wide as my breast root. They are invisible.
The cups themselves are not as closed as the Klaudyna, but they aren't crazy open either, I'd say they are about average for the CH/Ps in my collection.

On to the underwear. They forgot my thong when they mailed my stuff, they were super quick about getting it out and I did not have to pay another shipping fee. They are also tagged 38s :/
That's fine for the brief, the pair I have are also running small (again, the same as my Lawenda 34s) but the thong is definitely too big. It doesn't fall off or anything, but it's got some slack to it and it isn't as attractive as it could be. I'll have to take a needle to it. Both pairs are extremely lacey and very feminine. They are comfortable. The briefs are total coverage and have a high rise. They have the potential to be frumpy looking, but the giant lace panel in the front makes them appealing. The tong is super girly and has a lower rise.