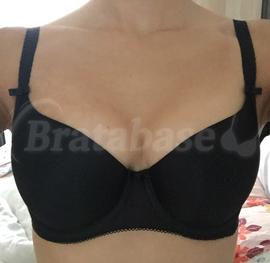 I absolutely love this bra. It is so comfortable and is perfect for my wide roots, bottom heavy but shallow breasts.

The central gore was stabbing me initially but after some bending of the wires- it was fine.

The push-up padding was not as thin as I had expected but it is also not as thick as the ones you get in most high street shops! The padding did create quite some cleavage that I'm not used to! (Quite a pleasant surprise)

I have the freya deco plunge, soft cup and the strapless in 28d. I do quadboob slightly in the 28d strapless but in this 28dd half cup push-up model I was getting a quadboob! How crazy is that. Unfortunately this model is sold out everywhere I looked otherwise I might consider buying it in a nude/blue, maybe try on a 28e to see how it fits.

The band was definitely too loose on me which I was severely disappointed with. This band was much looser than the other deco bras! I had to stay on the last hook for the centre gore to tack! However it is such a good comfi bra - I will probably just get a rixie clip when the band wears out!

Two pieces of advice for Freya:
- please make more of these and make them in different colours!
-please make the bands true to size!! It was almost as if they took the wing measurements from the deco plunge and pasted those on the half cup (bearing in mind the half cup has a wider base than the deco plunge which is designed for those with narrow and talk roots)
- please make some 26 bands!!!!!!!!! https://d28qt14g3opchh.cloudfront.net/smileys/icon_mrgreen.gif" alt=":D" />

Bottom line: if you want to buy this try going down a band size and going up two or even three cup sizes!! https://d28qt14g3opchh.cloudfront.net/smileys/icon_smile.gif" alt=":)" />

Band fit:
The back of the bra is not at the same level as the front (rides up)