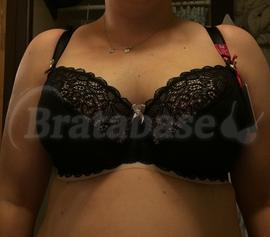 For reference, I consider myself extremely short rooted, projected, narrow, and even fullness (although my roots are so short I'm functionally FOB). My tissue is somewhat soft due to breastfeeding.

I had SUCH high hopes for Ellace! All the reviews sounded like it would be awesome for my shape. Alas, it was not meant to be.

First, the good-
- The thick sturdy elastic around the bottom of the band is amazing! It was great for comfort, and the contrasting color was a nice touch too.
-Nice rounded shape
-Very comfortable in general
-I tried this bra in 2 cup sizes, and saw no huge difference (I had to keep checking which was which!), so the stretch lace allows some wiggle room for the perfect fit or if your breast size fluctuates

Now, the not so good-
-Band was waaaaay too big! This was brand new and I put it straight on the tightest hooks. I would definitely need a 32 in this one.
-The stretch lace seems to be much more elastic than the cup mesh. For me, this was a recipe for in-cup quadding on my larger side unless I positioned my boob very carefully.
-I'm not sure why they put an extra piece of elastic along the top of the cup. It seems like this might cause issues for ladies that are full on top.
-In both sizes I tried on, there was a significant amount of wrinkling in the stretch lace on my smaller side. Putting the band on the tightest hooks helped with this somewhat.
-there was very minor wrinkling at the bottom of the cups. I could overlook it if this were the only issue.
- The wires were too wide for me. This was not helped when I had to put the band on the tightest hooks, but I also had wrinkling at the top of the band on both sides of the underwire in the underarm area... Just a strange fit.
- The cups were a little too tall, which probably contributed to the wrinkling at the top of the cup on my smaller side. It also meant that the wide-set straps were all the way in my armpits, making for a very uncomfortable bra.
-the gore tacked, but it kept twisting. Not the worst issue, but annoying.

I think for this bra to work for me, I would need to try a 32 band, but no clue about cup since both the 34G and 34GG seem to fit exactly the same. I'd also need a longer torso.

Center gore placement:
Doesn't lie flat against sternum
Strap separation:
Are too far apart
Cups separation:
Too separate for my boobs
Band fit:
The back of the bra is not at the same level as the front (rides up)
Cup's width:
There is empty fabric on the sides (Cup too wide)