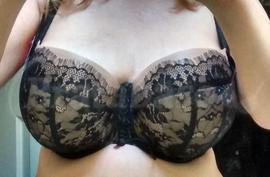 The Magique is here! The bra I've been coveting for months since it was first teased! And .. . uh . . might not be my favorite. Isnt that always the way it works?

First off, the band is too big. Significantly bigger than the 4 other Ewa Michalak 75s I own. BUT . . . someone asked a few months ago, when we were examining pictures, if the gore is adjustable - because the gore is laces instead of cloth. Someone said no . . . but they were WRONG!!

the first time I put the bra on, I was crestfallen at how loose it was on the second-to-last set of hooks. But i took it off and cinched up the gore and tied the excess in a slip knot. All the pictures are taken with the gore cinched up, but the measurements are taken after I took out the knot and redistributed the gore's lacings. It looks like only about a half inch difference in stretched length, but at least after that it fit firmly on the 3rd hook.

Plus I've always wondered how that would change the fit for me . . . well, actually, this bra is looking a tad too big? I have one pad on my smaller side and none on my bigger, but smaller side is still gapping a good deal. I do sometimes wear 2 pads on my smaller side, so thats not too big a deal. But I wonder if cinching the gore opened up the cups more - thats what other ppl said would happen if you sewed a gore like that. It changes the angle, making it more center-full friendly. But maybe too much this time?

Ok, the look of the bra - I totally fell in love with the look of the lace when I saw it on line. Too bad my camera didnt take very good pictures of it. It is lovely . . . but I have to admit, I dont love the shade of the backing. Its a fairly dark, mocha-ish tan. Not really a great color on my bluish pale skin.

Comfort? Not washed yet, not really worn yet. the lining fabric feels less soft than other Ss I have - could be because its not washed yet. But i wonder if its a cotton blend instead of cotton? I do think sometimes the linings shrink slightly when I wash them, but if its a blend, it might not.

So . . yeah, not as glowing a review as I expected lol! Anticipation seems to sometimes sour me! Honestly wondering if I really should send it back for a 70JJ instead.

Top of the cup:
Wrinkles, can't quite fill it
Band fit:
The back of the bra is not at the same level as the front (rides up)