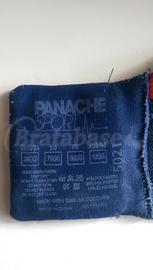 When I first saw this bra, & its promise of 83% less bounce-reduction, was available in my size, I had little faith it would live up to this promise, or be as comfortable as it promises to be either. Wow, was I wrong! I can jump up & down in this thing, & my boobs barely move at all, which is a mean feat given their lack of fullness after a series of weight fluctuations, making them susceptible to escaping the confines of some bras, although definitely not this one. While it's less flattering than my other bras as far as silhouette under clothing goes, it's more than acceptable to wear under a t-shirt when going to the grocery store or similar, in my opinion, & it's my everyday bra due to the comfort it offers in addition to its ability to keep the 'girls' under control while running errands, doing the housework, etc.

Much to my sorrow, my poor, long-suffering bra recently popped an underwire, so I'm now looking for a replacement in my current size, & had forgotten how expensive these bras are when they're not on sale. I got mine at a reduced price because it was a former season's colours, & my old school colours too, so I'm hoping my luck is a bit better this time & I can pick up a bargain again, but in a far nicer colour.