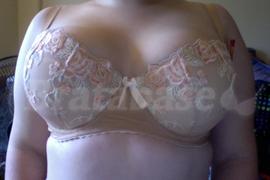 I've loved the Summer Time ever since I first laid eyes on it, but I missed out on the lovely unlined style. I also missed out the first time Jaimie from Bra Obsessed was offering a limited run, and when she offered it one more time, I knew that it was no coincidence and I needed to get on it. I ordered this originally in an S style but Jaimie was totally cool when I changed my mind at the last minute and luckily had this last CHP in stock. Yay. It's absolutely gorgeous and I'm so glad I finally jumped on it. There are a few loose threads, but nothing major. The band doesn't have the checked fabric on it like other models did and the bow is different. The band is so silky soft and strong feeling and just luxurious. Band stretches to about 29.5 and is very comfy. The straps are a little stretchy and difficult to adjust but I'm glad they're a little thinner than my other CHP in the same size. This is the first CHP style with pads, and they're SO difficult to put it/take out. Not sure why the hole for them has to be on the inside and smaller than they are. That's my biggest complaint. It fits fine with the pads, the right, more difficult side, gaps a little without them but it's still wearable. The width is perfect and the wires aren't too long and don't poke. The wings don't peak out from lower cut shirts. Very nice immediate projection and a lovely shape. The lace is only attached to the cups at the seams and I can poke my finger between the lace and foam. The lace does show under tighter shirts but it's so pretty I don't mind. The colour is a nice complement to my olive skin and it almost looks like there's no foam at all.The shape is, as expected, very round, uplifted and perfect. I ordered the thong in a 40 but received the brief instead. I emailed Jaimie about it but the brief is very soft, pretty and true to size. I accidentally ordered a size too big but it runs tight I'd say. All in all, I love this bra sooo much and I'm so glad I finally got the chance to own a Summer Time. I'd still love to try the unlined style if I can ever get my hands on one.

Edit: I wore this bra out. I was so wrong. I don't know if it's my period or what but the wings/wires harass my poor armpits. https://d28qt14g3opchh.cloudfront.net/smileys/icon_sad.gif" alt=":(" /> Nothing too major, just enough to be a little irritating. Won't stop me from wearing it though.

Edit: No further problems. No more armpit harassment, I assume it's from my period but since it hasn't happened since I'm not sure. Also, Jaimie has agreed to send me the thong and let me keep the brief since it was her mistake: she wrote down figi instead of stringi. I offered to send it back but she was very gracious and said that was not necessary. This is why I like working with Jaimie because her customer service is exemplary.