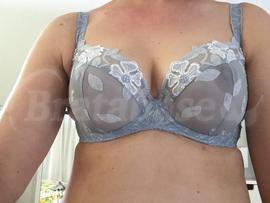 I thought I was getting a gray bra which I really wanted but it's more slate to cornflower blue in real life. I dislike the embroidery a lot less than I was expecting. I got a great deal so I'm not disappointed. But I might try dyeing it in the end. The embroidery that looks almost white in the pictures is actually a very pale lavender blue ... The embroidery only shows under lighter shirts from the color, not the texture. If that makes any sense. Good lift, low gore, very narrow wires (love them!) 4.5". Nice details on the straps. Cup has a ribbon across the top that could be taken off if it cut in on a person. I don't personally have an issue. Both of the plunges I have tried from this brand remind me of Ewa SM cuts when I see them on me. I haven't more than tried it on so I will edit my review after I've wore it for a few hours. First impression is that it is a good fitting model for me even if it's not my favorite esthetically.
Edited: I wore the bra for a couple hours yesterday. I didn't have any issue with it migrating out of my imf. The wires ends right at my tail of spence which is a strange feeling for me. I keep feeling like I might be failing out of the bra but I wasn't. It looks like the smallest bra I've owned (in the right size) that actually fits. I'm so used to wires being soundly wider than I am and the wires feeling somewhat firm where they end this was such a different feeling that I don't know if I can get used to it lol. Also the cups are shorter than many of my others but I didn't get any quadding, jiggling or falling as I wore it. After shark week I'll have to revisit the wire width... Might be my first time in a bra whose wires are a little too narrow.

ETA: my most comfortable bra in the heat. I've found myself wearing it more and more