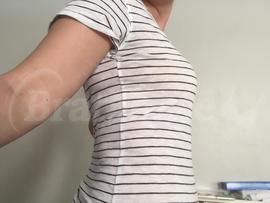 I only tried this after reading about it on a bra blog from a user here. It's gloriously minimizing - which is what I want under a loose tee or a button up. My job next year requires white button ups so I've been getting a little desperate to find a "nude" that will work for me. Sheer bras are almost always too sheer for me to use even if they are the right color. This bra is nothing really to look at. The subtle pinstripes are a nice addition. I get some bubbling, along the top of the cup but I'm pretty sure that from it being closed off instead of the cup actually being too small. Unfortunately there does not seem to be a good way to remove it. But it's not a big deal since it doesn't show too much clothes anyhow. The straps are comfortable. The band feels like it might ride up but didn't even after wearing it for a whole day. The cups are gloriously narrow. My tissue actually fills out to the underwire except for the top 1/3-1/4 of the cup where the wires are less U shaped than I am. The cup runs big for what I normally consider my size. It's rare for me to wear an E cup - typically I wear an F in a 30 band. I measured the width at 4.8 and depth at 9". I went by the measurements here on bratabase to choose an E. I almost didn't keep it. I'd ordered it from Amazon but then after it working so well under my shirts and I couldn't not keep it

Updated: after having this bra 6 months I'm still wearing it but it slips out of my imf and cuts in slightly at the top. It's bubbling not quadding but I still wish it didn't. It's the best nude tshirt bra I've found though even if it's get uncomfortable after a few hours. The gore is slightly too wide / tall for me and sets on my tissue slightly. I'm still afraid sizing up would be too much. (Edited to add- i tried a 30F and it's too big all over but it still cuts in at top) It's just not especially even/ full on top friendly.