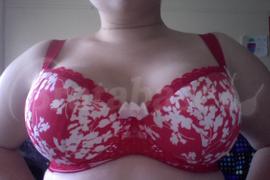 This bra took way too long to get to me, and as it turns out, the seller lived just a city over from where I normally reside! I probably would have gotten it last Monday if I wasn't at school. This bra isn't my favourite aesthetics wise-I would like it better without the lace. However, it's a CHP, cheap, and my size. At first I thought this bra felt cheap because of the materials on the cups and the thinness of the foam but the more I touch the fabric it feels more silky than slippery and the thinner foam still gives the same great support the Stalowka does with its heavy duty foam. Aside from the lace, this bra can do no wrong. The shape, to quote Josh from Drake and Josh is "spherical. SPHERICAL!" That was literally the first thing I thought of when I put it on. The straps are nice and plush, although others might think they're too wide-they are. Wires follow my root as perfectly as I'll get and don't harass my armpits and they touch at the very top.. The coverage is nice and low, providing me with some absolutely lovely cleavage. The band is firm: this is one thing I noticed that has remained constant in both my CHPs. Size up a band if you're closer to a true 30 than a 29 or 28. I'm going to wear this with an extender until I break it in. There are pockets for pads, but the seller didn't include any which is fine because the cups would have been too small. Another small gripe is the bow at the front is a little wonky and sometimes pokes up out of my lower cut shirt. I also figured out that those bulges are probably my tail of Spence and they don't really belong in the cup, not that they stay when I scoop them in. All in all a great bra at a great price, and unless someone has a CHP in a 65FF for trade and covets this one, I'll keep it.