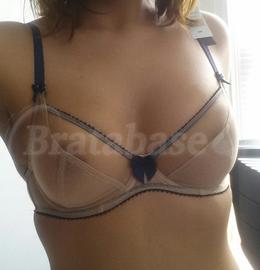 Disclaimer:mostly huge rant. Would not recommend this bra to anyone unless you love to have your heart broken and feel full of regret and disappointment.


What can I say? I did it again. This model is a mess.
Extensive/comparative review of my (2-3) Dessous bras coming up tonight as long as weather stays nice enough for me to get some decent/accurate photos.


My 30E was too FoT, 30DD is a 34C and wrinkles at the gore, and this one perfectly encloses my inner and outer tissue, and is a true 28 band, but makes me quad like nothing I've ever tried. I am on my period, but I tried a bunch of other bras on and nothing fits me this way. The quad is reeeeally bad. I unscooped a little for the photos, and it was still bad. I mean, almost entire boob out of bra, bad. Wtf? Sister size up a band(erm 6") and I don't have this problem.


On a side note, there is bottom wrinkling in the photos, which I suspect is just from extending my arms to take pictures or not adjusting.
It wasn't wrinkling at all before.

I just wish this had worked. My 30DD cups were fine, and the original owner said this one had a TTS band, so I thought, "score! Finally found one that will work!"

Ugh.
And the sandy beige is the perfect nude color for me.
Claudette, why you no work???!?

Well, but I said this was the last colorway I'd try. There is a new one that is a similar beige with a pink I believe that I really liked, but no way in a million years am I ever dropping $60 on one of these bras.
If I find it for $5, maybe. At this rate that is around all I am willing to ever drop for one of these again. Simply because it's always a mystery and I may or may not get one worth more than that.

Firstly, the elastic on this one is a lot better than my "30DD", which is great, but then I have other fit issues.
But then the elastic on the mauve 30DD is so cheap, it actually reminds me of the broken elastic on a pair of underwear I purchased when I was about 12(about half my life ago) at the $1 store. No exaggeration, it is literally that cheap.
My mom has a tendency to hang on to clothes that I put in donate and throw away bags, I found that pair of undies, and the elastic was all stretched out, had no stretch left, falling apart. That was my immediate thought when I even just picked the 30DD out of the bag. I knew just holding it that something was wrong with the band.

No bra new from a manufacturer should ever feel that way. Especially something that is so expensive at original retail price.
If I had to guess how much these bras were brand new, I would place the mauve at around $5-10. Which I believe it dropped down to on sale, thankfully.
I would place the 28E and 30E at around $20-35.

Also just the general inconsistencies..would not ever recommend anyone paying the highest retail price for this, or anything over $15-20, unless you don't care about band stretchiness or possible cup inconsistencies as well. I feel like the Dessous is like Mystery Gum, and I hate that just as much.
It always looks good, but ends up awful.
Dessous is Mystery Gum.

It's going to take a lot for me to stay away from a 28F in this colorway because the sandy beige perfectly matches my skintone, and I love the navy; I love the look of the Dessous, as always. But I hate imagining ever spending another dime on one of these bras.
If I do find this in 28F, around $10, I might just to see just how inconsistent they are (for science, really), but I hate even imagining it. This model has been full of disappointment. I would probably end up with a 32 band that is too FoT in 28F. But that just doesn't make sense. It doesn't even make sense why a sister size doesn't have the same cup depth or shape or why, for instance, someone owning the same new colorway may not have the same band stretch as someone else, as I've now experienced with this one being TTS (a good thing) and the mauve being crazy stretchy while I've seen others TTS.
Ugh this bra.
It's like a good looking guy, full of promise but can't follow through on anything. Don't break your heart. Don't break your wallet. Don't break your boobs. Don't buy a Dessous.