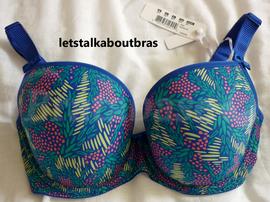 This is my third Deco purchase is a short span of time. It follows my 28G - Freya » Deco Vibe Moulded Plunge Bra (1704) and 28G - Freya » Deco Rebel Moulded Plunge Bra (4234) . I was debating between the Deco Lagoon and Deco Spotlight. I read the latter had a very stretchy band and couldn't find a 28, so I ordered the Lagoon in 30FF. More explanation on the size choice to follow.

As noted above, I have two Decos in 28G. The Deco Rebel fits really well - snug on the band, which I like, but some days I need to wear it with an extender on one hook. They are known to stretch out fast, so no big deal. I've worn it a handful of times and washed it, and have since had days when I could wear it without an extender comfortably. It did not start out that way. I think my underbust measurement fluctuates a lot during the month. It was after I had one quite painful day the first week I wore the bra that I began considering a 30FF. Fast forward a few wears, and one other issue I have with the Deco in 28G is some rubbing/chafing in the armpit area from the cup edge beneath the strap. It is pronounced when I put my arms out in front of me. In a standing position, the bra fits great with minimal gaping, but when sitting, it can sometimes gape a lot.

I have a similar issue with the Vibe in 28G as far as the rubbing and gaping. The Vibe band is also super tight in comparison, and I wear it with an extender on at least 2 extra hooks. The Vibe band is a different material. It actually doesn't "cling" tightly to my back. I have at least 2 finger space beneath the back, but since it doesn't stretch so easily, it constricts when I breathe, making it too tight on my bony ribs.

With these things in mind and considering that darker colorways can run tighter, I decided to go with 30FF for the Lagoon. I am reasonably happy with it. This review will probably continue to compare it with other Decos, but I will try also to review it in its own right.

The Deco Lagoon is the softest and most comfortable-feeling bra I own. It is more comparable to the Rebel and than Vibe (as to be expected). Of course, the band is bigger, but it is also a much softer and stretchier material. I tried it on a few times before deciding to keep it for this reason. I can already start it on the second or even third hook and it's comfortable. My ideal band in Lagoon is probably a 28.

HOWEVER, and this is why I am keeping it, the cups on the 30FF do not invade my armpit area like they do on my other Decos. Sadly I don't know if that's because Lagoon cups run shorter in general or because it's a sister size. When I was a 30G, I used to size up to 32FF in other brands for less cup coverage at the sides, so it seems to have worked here as well. I am very happy with this as the cups otherwise fit identically to my 28G Rebel in terms of volume, but without the discomfort.

My only worry is the band possibly getting loose quickly. I am well contained by the cup edging and don't spill out over the gore, but this changes rapidly if the band is too loose. Since I have very soft tissue, I need my Deco bands to be firm to keep me in place and keep the cups pulled in against my chest. I'm prepared to get a Rixie Clip when the time comes and fingers crossed it won't stretch out too badly.

The quality of the bra is very good. So smooth and soft. The pattern is okay, and I love the deep cobalt blue. I would have bought the solid Deco in Cobalt if I could have found one, but I'm late to the Deco party. I wear a lot of blue shirts, so that works for me, and I haven't had any issues seeing the pattern through thin shirts.

In sum, I thought that losing weight might have fixed my "between sizes" problems, but they have just reappeared, putting me between a 28 and 30 band.

30FF is a little big in the band; need to start on second hook (3rd firm and comfortable)