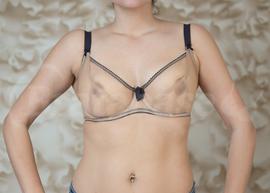 My particular bra is narrow and immediately projected, with an extremely stretchy and generous band that I've since had to tighten. This one is a good fit on me, but I hear the fit changes every dang season. So, I'm a little hesitant to order another one... but despite slightly too tall cups, I like having this one around! Full review on my blog.