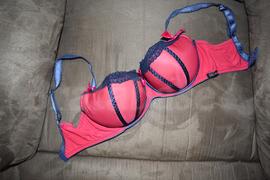 I feel like I'm about to commit a cardinal sin here.... but I just don't like the CHP. I like the S, I love the SM, and the HM is so sexy, any issues are forgiven. The CHP though? Meh. I want to love it, really. Halfcups are so visually appealing. But I can't stand it on. I don't understand why everyone loves the CHP, when the S and SM are heaven to me.

Bra description: A two-seam, three-part halfcup, with Ewa's famously narrow wires. The material on the cups is a brilliant, almost shiny red (think like swimsuit material) while the band is a brilliant red without the shine (actually the same color/material as the Ewa Michalak S Truskawki Z Malinami (383) )). The vertical seams and the wires are covered with a deep navy ribbon, while the top of the cup displays and even darker navy lace. The straps and the back clasps are more of a slate blue than a navy.
I got this bra used, so its got some pilling on the band (but not on the cups), and I didn't get any inserts with it.

On to the fit!
Without cookies, I get gaping at the top. The depth is fantastic, but my boobs just kind of puddle in the cup. I put some the cookies from a 65FF S, and the fit was "perfect".... I just don't like it.
So, there's tons of projection, immediate and at the apex. It creates a very round shape. It does not lift as much as the S does. The cleavage is of the subtle, "gentle hills" variety.

I compared this bra to my 3-part Comexim halfcup longline (70H - Comexim » Papillon Longline ) which I'm starting to bubble out of a little. The comexim has more immediate projection, a rounder profile, and slightly more angled cups. I like the comexim better, even though its a little small.

Then I compared it to a freya halfcup (30FF - Freya » Piper Padded Longline Bra (1233) ). As with all Freya halfcups, the longline's wires are painfully wide, and the cup a little too shallow. The CHP's wires are narrow and more comfortable, and the deeper cups create a more projected profile than the shallow, flattened freya halfcup look. With inserts, the CHP creates better cleavage. Despite the fit problems, I'm more likely to wear the longline than the CHP.

The fit is good.On paper, this bra has everything I ever wanted: Sexy color/appearance, narrow wires, immediate projection, lots of depth, shorter cups.

So why don't I like it? I despise the top of the cup. I've had this problem with every single CHP I've tried on. The top of the cup is absurdly noticeable under any top I wear. The top of my comexim halfcup and my freya halfcups aren't anywhere near as noticable. The only bra I've tried with a worse top seam was the Cleo Maddie (which is really tall, fyi). With the CHP, the seam is noticeable with or without inserts. Without, the cup is too tall. With... it's not quadding, persay. The cup is not too small. It just has a noticeable seam+dent in my upperboob. I don't it. Am I the only one who gets this?

In conclusion, I'm reserving full judgement until I try the CHP in a size down, just to make sure its not a size issue. But I'm hedging my bets that it's just a weird thing in my head and I will never like the CHP on me, no matter how I lust after it.

Pads helped, but the top seam is still obvious. Maybe I need to size down