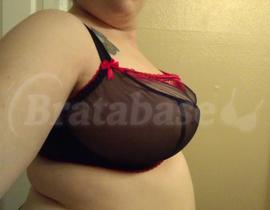 I've had CK Bardot recommended as possibly working for me, and I found it on sale on amazon, so I decided to give it a try.

For the record, I have projected, full-on-bottom breasts with narrow and very short roots.

From what I could gather, the band on this bra is supposed to run stretchy, so I decided to sister-size down from my usual UK size, to 34J instead of 36HH. The band is not remotely as loose as I expected, and so I needed an extender to even be able to try it on - it runs about halfway between a 34 and 36. So if you're in-between band sizes, it might work for you there!

The cups just fit me...really weirdly. They're clearly too large, and the measurements I took make it seem that it simply runs large in the cup. Despite this, the gore doesn't quite tack right, and I know for a fact that it's not a case of the band being too loose for it to tack. The wires are a bit wide, but not hugely so.

I do have a lot of wrinkling at the bottom of the cup, and no matter how much I scooped and swooped and tried to readjust the cups it would wrinkle at the bottom. As far as the top of the cup goes, it's most obvious near the gore that the cups aren't right; there's a lot of loose fabric there. Overall I feel the bra really accentuates my shortness and just makes me look really pointy, which is at least somewhat because the cups are the wrong size.

The bra reminds me of my 36HH - Panache » Jasmine (6951) a lot, but the top isn't stretch lace. The bra itself is a very sheer material and I like the red accents on it - it's simple and subtle. I'd like to try it again in another size (maybe 36H would work better?) but amazon appears to be out of stock on it. Oh well.