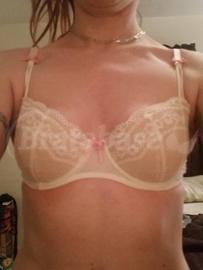 First impressions:
This is really comfortable!
This just might fit!
Wow, they weren't kidding when they said the band is very stretchy.

Of course, it got more complicated from there. I love the detail of the split strap near the cup. I think it's adorable and downplays my annoyingly prominent tail of spence. I feel like this bra is really cute, in a sweet sort of way.

When I first put it on, I get quadboob, but as I wear it, this settles down. Since the shallow cups are very lightly padded, they give some shape and I don't have the kind of issues with my soft boobs that I get with unlined. I find that a little poking and tucking (very minimal) helps the fit look right for me. Cups are pretty soft and a bit stretchy, so they're rather forgiving but also not as supportive as some other bras. The wires are flexible and fit well under my arm and around my boobs, but I could probably use a higher gore.
The gore is actually quite comfortable and sits flush against me. If I lie on my side, I do spill out of the cups, but not as bad as I did with the padded pushups in a too-big band that I used to wear!

Being so shallow, as expected it doesn't give much forward projection, but it does give me a nice rounded shape, for the most part. From the side, my breasts look quite small, with and without clothing on....but I suppose that's because they are. https://d28qt14g3opchh.cloudfront.net/smileys/icon_smile.gif" alt=":)" />

After wearing this for several hours, I have noticed a few things. Probably because the band is so stretchy, eventually my boobs settle way down. I start getting a little quadding towards the gore and a bit more gaping in the cup-meets-strap area. Also....this band is so scratchy in the back...it is driving me crazy. I am really sensitive to fabrics, so this isn't all that shocking, except that it is so opposite of my first reaction about how comfortable this bra is. (It still is....in everyplace but the back strap.) I am going to wash it and see if it softens up a little bit.

It's also worth noting that the vertical seams will show some under thin, soft fabric shirts. The top of the diagonal seam is a little weird. It almost appears that the one I got is irregular. The lace kind of bunches up there, as if it wasn't trimmed enough after the bra was assembled. (I trimmed it slightly and it is a little better, but still not resolved.) On one cup, this makes the lace flip out in that area. The light padding is sewn to the lace mostly just along the underwire and in a couple of places along the top of the cup.....the end of the diagonal seam being one of the points of stitching.

Overall impression: This is a cute bra and is good for shallow, wide, relatively wide set roots. For now, I am keeping it, because this is one of the best fits I've found and it's actually wearable. I am surprised at the quality though...I would expect more from Betsey Johnson (although I have never tried their bras before, they do make a lot of high quality products. Or, at least, I thought so from their price tags!) There is actually a very cheap feel to the construction. The very stretchy band and straps make it obvious that this is not going to hold up for very long. The way the lining and lace is and is not stitched together, and the awkward tops of the diagonal seam, also make me feel the quality is questionable. I definitely would not pay full price for this, but the $14 I spent on eBay was worth it.

Getting closer. Very close to a decent fit. Keeping.