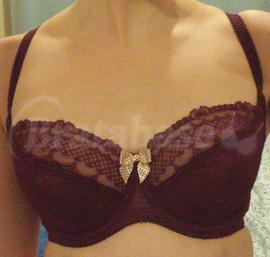 The fit is nearly perfect. The cups are a tiny bit too wide on the sides (1/4" on my right side, almost 1/2" in my left side, but really, that's not major), and there's a tiny bit of wrinkling over the apex. I don't understand why there is extra fabric there; if I were to fill it, the seam across my breast would actually cause an unattractive dent across my breast if it was all filled! I don't really notice it under shirts, so I'll probably leave it alone, but if it does end up bothering me, it's nothing a quick little hand sewing couldn't fix! https://d28qt14g3opchh.cloudfront.net/smileys/icon_smile.gif" alt=":)" /> Basically, the upper cup fabric has a bit more stretch than the thick seam.

I understand that the actual bra fabric has poka dots, but they're so faint and the lace is so elegant, the bright white bows with purple tiny dots don't really seem to go with the bra. They seem out of place to me. I might actually cut them off, but we'll see, they might grow on me. (Also, I paid full price for this set, so "damaging" it in any way is a bit nerve-racking to me.) Otherwise, I LOVE the color! To me, burgundy is a bit lighter in color, but any shade of berry/purple works really well with my skin and it's very royal and attractive to me! https://d28qt14g3opchh.cloudfront.net/smileys/icon_smile.gif" alt=":)" />

What REALLY boggles me, is that this bra is so similar in measurement to the Gossard Phoebe, and while this bra fits, the Phoebe is WAY too large in the cups. After further analysis, it appears that the Marcie is definitely more shallow in shape, and the cups have more of a < shape (not an extreme cone, but more gradual slopes). On the other hand, the Phoebe cups have a very pronounced C shape, with immediate projection and a more obvious dome shape, so it's much more rounded than the Marcie cups. So while the wire width and cup depths are about the same, the cup shape of the Marcie is for more flat/pointed/shallow breasts, and the Phoebe is for very full and rounded breasts. There is more overall cup volume in the Phoebe, which is why it appeared much much bigger on my less-than-round breasts.

Oh yeah, I forgot to mention that I got the matching underwear! https://d28qt14g3opchh.cloudfront.net/smileys/icon_smile.gif" alt=":)" /> The fabric and elastics are VERY firm. I contacted a Bravissimo fitting expert and she said I would be between a medium and small with a 27" waist, 33" upper hip, and 39" hip, BUT the medium was quite tight! While it was comfortable, it's didn't create the smooth silhouette I was hoping for by sizing up from a small. https://d28qt14g3opchh.cloudfront.net/smileys/icon_sad.gif" alt=":(" /> I still got some muffin top. Lying flat, the panty waist is 14.25" and stretches to 17", the lying flat hip is 16.5" and stretches to 20." So as you can see, with a max stretch of 34" in the upper hip area, and max stretch of 40" in the hip area, it's only 1" larger than my body measurements, which means I get some angry elastic! I wouldn't have been able to fit into the small without squeezing myself painfully. The panty is still very cute (I LOVE the ruffles on the sides!!!) and I really like the matching set, I just wish it had a bit more flexible and soft give.

Use an extender, use cookies to fill empty space

Center gore comfort:
Underwires dig into sternum, because they are too high
Strap separation:
Are too far apart
Top of the cup:
Wrinkles, can't quite fill it
Band fit:
I can fasten it, but it feels too tight
Cup's width:
There is empty fabric on the sides (Cup too wide)

Use an extender, use cookies to fill empty space

Center gore comfort:
Underwires dig into sternum, because they are too high
Strap separation:
Are too far apart
Top of the cup:
Wrinkles, can't quite fill it
Band fit:
I can fasten it, but it feels too tight
Cup's width:
There is empty fabric on the sides (Cup too wide)