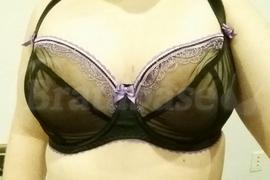 I bought this bra along with the Arizona after having people recommend this to me for a long time because of my projection and short roots. I was reluctant because I had pretty much sworn off CK after the last time I tried anything from them (which was a Jewel and an Smoothie), and I have to say if I had ordered this alone my faith in them would not be as restored as it is with receiving it along with the wonderful Arizona.

While I still think their unpadded bras need work, this is a VAST improvement from the 30G - Curvy Kate » Jewel Balcony Bra (CK3401) , which fit me so strangely I was ready to give up on CK. The Bardot has vastly improved in shape and gives me a much nicer projected, slightly rounded but natural shape with a bit of a peak. The reason I say I still think it needs to be improved is because it still gives me odd wrinkles. If you look at my last pic--I was pointing to the diagonal crease in the top section of one cup, then when I saw the pic I couldn't believe what a wrinkled mess the other side was! I also feel it lacks a bit of immediate projection, causing that odd ridge at the bottom, which is especially unattractive in a sheer cup.

It is certainly closed on top--I would probably not recommend this to anyone FOT (unless they're very short rooted like me) or with tall roots.

Luckily, I can still wear it with loose clothing and therefore those wrinkles won't show, but it is sad that this means this bra fails as a boudoir bra for me, since it is so damn pretty. The cradle is made of a silky material which is really nice.

Overall, I think Curvy Kate is really making strides to improve their construction, which I really appreciate. I'm not sure if I would buy another one of their unpadded bras unless they continue to make improvements, but this order overall has brought me back to them as a customer.