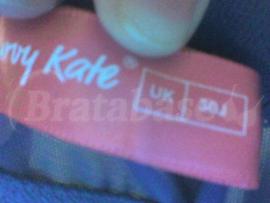 Currently my most comfortable bra. In a 30J, It gives a natural tear-drop shape, and keeps my breasts close to my body without having them up front and under my chin (which is good for other days!). There is a very, very slight east-west shaping going on, but it's definitely not as apparent as in other large-cup Curvy Kate fabric bras, and it's unnoticeable under clothing. I could actually size up in the cups to improve the shape, but I'm afraid the wires would be much too wide, and more painfully, too tall; they already cut into both my breast bone and my breast tissue on either side of the gore. There just isn't any room that high up. I've temporarily fixed this by folding the underwires together (like closing a book) to form a 'v', and if necessary I'll sew them permanently into that position. Right now, the material used for the gore/wire channels is stiff enough to stay put on it's own.

The underwires at the sides aren't too tall exactly, but the cups are--they dig into my underarms where they attach to the straps, which are widely placed. This is most likely a problem I'll have with most bras, however, due to having a short torso (along with being pretty short in general) and narrow shoulders. Hopefully the cups will soften with wear, but either way, the irritation is minor and not enough to put me off the bra for good.

Aside from this, the Emily is comfy and supportive. It has three hooks and eye enclosures as per standard, wide wings, and a band that runs true to size. There is some embroidery along the bottom edge of the gore, which is pretty without being scratchy, irritating, or noticeable at all when it's on. The straps are fully adjustable, and I think the hooped edging detail along the straps keeps the sliders from slipping out of place. The embroidery at the top of the cup lifts away slightly when I move my arms forward, but I think that has to do with my being full-on-bottom. Otherwise, the mesh upper-section of the cup does a pretty good job conforming to my shape. The blush embroidery also catches light pretty easily, so you might sparkle somewhat under particularly thin tshirts.