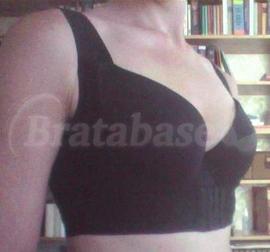 This bra is a sample of Braologie's new 'Posture-Contour Bra Casual' line, kindly sent to me by Braologie in return for a small favour I did them. Also included in the package was the 'Posture-Contour Mini-Vest', on which I will add a few notes as well. The opinions expressed below are completely my own and not influenced by the fact I essentially got this bra as a gift.

This bra is not labelled and no size was communicated to me during the inquiry process, so I'm not exactly sure whether 28E is correct. Based on how this and other bras fit me I'd say this is a either a generous 28E or a small-ish 28F, but this is only a guess. This bra was selected for me by Braologie's bra-fitting 'guru' on the basis of measurements and photos submitted by me. This Posture-Contour Bra Casual was recommended to me mainly because it is supposedly a little bit lower cut under the arms than the Lacie. On me it is still plenty high -- any higher and it wouldn't fit me anymore -- so it really isn't cut THAT low.

A foam-lined, plain black bra out of smooth, satin-y material with one visible seam running 'diagonally' across the cup (the cups are constructed as three-part cups, but the 'vertical' seam is covered by the smooth satin fashion fabric). The seam is very flat and won't really show under most clothing, making this an ideal T-shirt bra, in my opinion. The inside of the cups is covered with soft cotton jersey, with pockets for holding the included removable foam 'cookies'. The 'cookies' are also covered in cotton jersey and very soft.

The wings and back of this bra are very firm and tall. They are made out of two layers of powernet-like material -- a smooth and shiny layer on the outside and a matt layer on the inside .. with two pieces of boning along the side seam. The elastic along the bottom edge is nice and wide. The closure of this bra is FOUR hooks and eyes tall. A matching extender is included.

Straps are plain and wider than any I've encountered in my size range. They adjust from the front which means they are easy to adjust when wearing the bra.

I have to admit I was sceptical as plunge-style bra NEVER seem to work for me, but I'm always in for experiment so I gladly accepted Braologie's offer. And I have absolutely no regrets!

The first time I properly wore this bra was on a long day travelling -- over 12 hours non-stop -- by aeroplane, two buses, train and taxi. During the half hour bus trip to the airport I thought I felt something pressing against my ribs right underneath my breasts, but the feeling went away and this bra has been the most comfortable thing ever since. So comfortable that by the end of that gruesomely exhausting day I didn't want to take it off! It's not the kind of comfort that makes you forget you're wearing a bra, but rather the pleasant feeling of a firm hug meets effective support. Also, whatever I did, this bra staid in place perfectly, keeping my breasts secure and looking absolutely marvellous. I know very well that a well-fitting bra is SUPPOSED to stay put without (too much) adjusting, but with my short upper torso, high set breasts, and very pronounced pectoral 'wing', EVERY bra cup I have ever worn gets pushed out of place at some point during movement. Not this bra, though, which officially makes this bra the most comfortable, best-fitting and possible the most flattering bra I possess at the moment.

The wires are very comfortable -- they are very flexible and conform well to the body, but the sturdy band prevents distortion -- and the gore isn't really as low as the gores on some other plunges I have tried, so my breasts don't fall out in the middle. The armhole on this bra is the most comfortable of any bra I have ever tried. The cups still reach up to my pectoral 'wing', but it's only the very top part that gaps ever so slightly when I move my arms and shoulders. As said, the rest of the cups stays perfectly in place.

One caveat: I have to wear it with the full extender as the band is really really snug and firm. I CAN close it if I really really try, but only just. If I still want to be able to breath I NEED the extra space of the extender. At first I thought even that wouldn't quite cut it and a full band size up would be better, but after wearing it some more I'm not so sure. The band hasn't noticeably stretched, but it just feels more comfortable now and a full band size up would probably be too much as I would have to wear that one at the tightest hooks anyway. I'm normally not a fan of extenders, but this one is so wide and comfy that I don't even notice it, so I'm quite fine with it.

The first time I wore this bra was at the 'smallest' point of my cycle. At that moment the cups fit best with both 'cookies' in place and the straps tightened almost all the way. Almost two weeks later, though, the cups fit my larger breast fine without the 'cookie' and the straps somewhat looser, although I still need the 'cookie' on the side of my smaller breast. I CAN wear it without, but I noticed some wrinkling in the cup (I get folding in the bottom and side of the cup on my smaller side in almost all my bras) when I tried it that way and there just was a tiny bit too much excess space to feel well-contained.

According to the instructions that come with the bra (yes, there's a sheet with instructions included!) this bra should give that typical pushed-together buttcrack cleavage look. It doesn't do anything of the sort on me, but I don't think that is because this bra is too big. It's actually rather perfect, both width- and depth-wise. My breasts are simple not spherical enough to get that look. My breasts are so conical and naturally East-West that in order to get them to touch I have to completely flatten them against my chest, which is horribly uncomfortable and looks absolutely ridiculous. Because they are so conical the don't really extend sideways past my frame though, so there's not that much to pull in from the sides either. As a result, this bra give me a super-lifted, but still natural look and cleavage that I really like, without making me feel as if my breasts are forced into a position or shape that is unnatural to them.

I was also sent the Braologie 'Posture-Contour Mini-Vest' so I'll add a couple of words on that here as well. It is, in my opinion, a nifty little garment that really does what it promises, although I wouldn't recommend it if you constantly require full range of motion as the armhole and straps would probably cause uncomfortable chafing. However, for more stationary activities, like spending (excess) time behind a computer, it is definitely something I would use -- and my posture isn't even that bad https://d28qt14g3opchh.cloudfront.net/smileys/icon_wink.gif" alt=";)" />

Size-wise -- again, no labels -- I'm guessing this is a 28 band as well, although it is MUCH stretchier than the Posture-Contour Bra Casual I received. Unstretched they measure quite exactly the same length, but stretched there is a clear difference. The vest I can comfortably wear on the loosest hooks without extender (a matching three-hook extender is included). I CAN relatively easily close it on the tightest hooks, but that begins to feel really restrictive. Besides, it isn't necessary to experience the correcting effect, I have noticed.

I now want this bra in beige as well and preferable two of each colour so I never have to wear another bra again https://d28qt14g3opchh.cloudfront.net/smileys/icon_wink.gif" alt=";)" />

Okay, that is perhaps a slight exaggeration, but seriously, if you haven't had much luck with other plunges like Ewa Michalak PLs or the Freya Deco, DO give this bra a go. I know Braologie has been a bit hit or miss in the larger cupsizes (rest assured they are working on that, though), but in the smaller sizes they certainly seem have their act very well together.

Strap separation:
Not a problem
Band fit:
I can fasten it, but it feels too tight