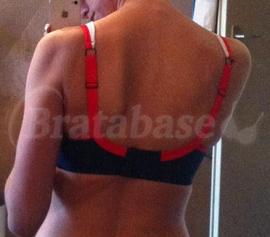 What would you tell a friend with similar boobs about this bra?

GO GET PLENTY OF THEM!

I want to LIVE in this bra!! It's a great fit; this must be sports bra heaven! It looks good under tops. I haven't tried the racer back option yet, but I don't formally need it (maybe just under some tops?). The band is fairly tight; only buy the 28 band if you're a 'true' 28. I love the tight band on my 25.5in underbust. It's nice and tight, and the cups hold my breasts like they're made of china.

I just ran with it, and there's just about no bounce! I ran without the J-hook making it a racer back (I haven't even found that yet, it's supposed to have it), which is supposed to be used for extra support. My boobies weren't going anywhere... Can I have one of these for my bum as well please? THAT was the bouncy part on this run. According to reviews the J-hook reduces any remaining bounce.... I can't judge the difference between zero bounce and zero bounce. Some also say it's uncomfortable in the neck when worn with the J-hook, but I'm not bothered by that; I simply let out the straps and have a quite comfy racerback bra which sits comfortably between my shoulderblades. To resolve the neck issues some people have with it Panache would have to reduce the adjustability of the straps and make the J-hook lower on the back. They should put J-hooks on more bras.

I've had the OLD model Shock Absorber Active Multi Sports (4490) , and never bought the new ones because the double hook in the back annoyed me: the bit between shoulder blades became wider. This is uncomfortable, as it poked my shoulder blades when moving. Then I had the Shock Absorber Ultimate Run Bra (B5044) , same problem to less extent, and it has pretty good compression-support. I 'outgrew' that one though (and the old shock absorbers have grown with my boobs, now they're yoga bras)
The Panache beats any one of them by far, and I love the shoulder comfort. No annoying straps on/against my shoulder blades! I shall be ordering more of these to keep up with my active lifestyle.

Oh, and it says 'hand wash only'.... but all my bras say that. It survived the machine just fine.

Got it in black and white as well; both have slightly stretchier fabric for some reason.