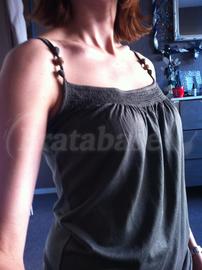 Bought this one from another bratabase user. I'm pretty excited: it fits. I'm always pretty excited if something fits.
Tried it on, took some pics and in the first instance I was a bit dissapointed: it doesn't stay put. At all. On the smallest hook, Then there's also the issue with it's odd cup. The bit where it goes up straight after the wire, and then the top 'seals' it off? The oddly wide wires? The 'quad boob' in the pic is simply from the bra slipping.
It fits like a dream with straps on, and doesn't ride up. OK; ALMOST perfect. I have a tiny bit of cup wrinkling at the sides but I have to go out of my way to feel it. You can't see it.

Some puzzling later (and a full day of wear with straps) I figured out something: This bra has a band that is supposed to sit higher on your back than I'm used to, compared to the bottom. And suddenly the wires lose their odd angle a bit, and suddenly any quad boob/non bottom filling is gone. And we have cleavage. And, on the second hook it seems to stay put slightly better without the straps; I might test this at some point but I'm not convinced this really is a strapless that will work on my 25.5 in underbust. Maybe for short whiles.

But still, quite happy. It looks natural under clothes. It's comfy, and even if I can't go strapless; I still have the option of crossed-back, halter, etc. .

Now I hope it doesn't stretch out too much.